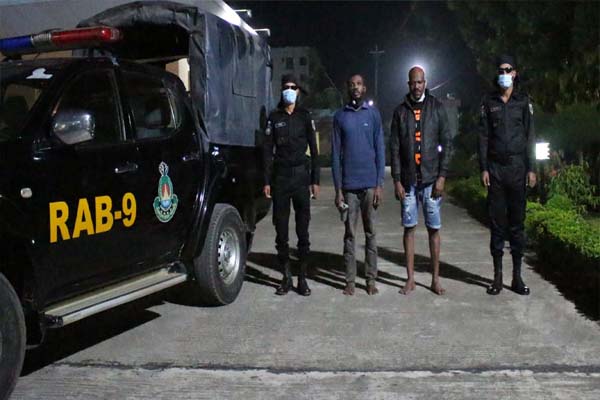 A Sylhet court on Monday sent two Nigerians to jail on charges of trespassing in Bangladesh through Jaflong border.

Rapid Action Battalion 9 media officer Obain said that acting on a tip-off, a RAB team raided Bateshwar Bazar, about 20km off Sylhet city, at around 1:00am Sunday and detained the duo.

The team also seized a passport with a fake visa, a driving license, 4,320 Indian rupees, Tk 1,300, two mobile phone sets and 2 SIM cards from their possession.

Later they were handed over to Shah Paran police night after filing a case in this connection, said RAB.

Shah Paran officer-in-charge Abdul Kaiyum Chowdhury said that they produced the duo before the Sylhet Metropolitan Magistrate Court in the noon and the court had sent them to jail.