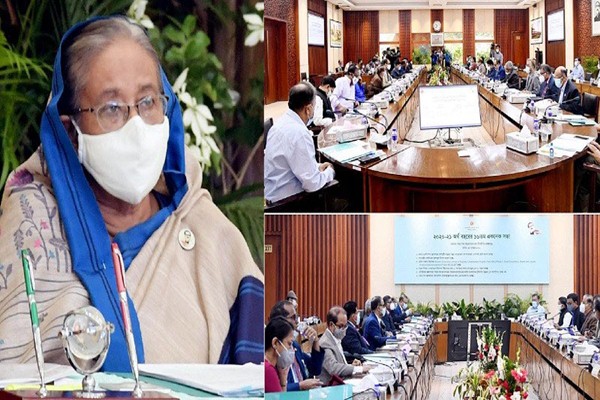 The government today approved two separate projects on the Western Economic Corridor and Regional Enhancement Programme (WeCARE) Phase 1 including the WeCARE Phase-1: Jhenidah-Jashore Highway (N-7) Development project with an estimated cost of Taka 4,187.70 crore in a bid to upgrade 48.50 KM highway to six lanes including service lanes on both sides.

The approval came from the 16th meeting of the Executive Committee of the National Economic Council (ECNEC) in the current fiscal year (FY21) held today with ECNEC Chairperson and Prime Minister Sheikh Hasina in the chair.

Briefing reporters virtually after the meeting, Planning Division Senior Secretary Md Ashadul Islam said that the meeting approved a total of seven projects involving an overall estimated cost of Taka 10,702.23 crore. “Of the total project cost, Taka 6,459.27 crore will come from the Government of Bangladesh while the rest Taka 4,242.96 crore as project assistance,” he added.

Of the approved seven projects, five are new while two others are revised projects.

The Roads and Highways Department under the Road Transport and Highways Division will implement the project by December 2023 as the Prime Minister has reduced the stipulated timeframe for completing the project by two years. Of the total project cost of Taka 4,187.70 crore, the World Bank will provide Taka 2,705.65 crore while the rest Taka 1,482.04 crore will come from the government fund.

The main project operations include some 151.004 hectares of land acquisition, 48.50km pavement construction, 63.42 lakh cubic meter earth work, construction of one flyover with 1,647.29 meter flyover and four bridges with a length of 198.12 meter, construction of 55 culverts, 12 pedestrian over bridges and one underpass alongside necessary consultancy services.

The main project operations include 611km road development, installation of 120 waste management units, maintenance of 611km upazila, union and village Roads as the scheme aims to ensuring overall socio-economic development of these four districts through transportation of farm produces, its marketing, distribution and preservation through improvement of the rural communication system.

He said this project has been undertaken as the period for the ongoing IDEA project will expire in December.

Under this new project, Azad said all citizens above 14 years will get smart NID cards. Besides, the Election Commission will send its teams to 40 largest host countries of expatriate Bangladeshis to enroll them in the voter list and provide them with NID services.

The major operations of the project include production and personalization of smart cards.

He said the old equipment and technologies of the existing project will be used in the new project. “So, the project cost will decline significantly.”

The Planning Commission member said they have placed a recommendation in the meeting so that the NID services could be brought under the revenue budget instead of running it under project.

Meanwhile, the Planning Division senior secretary said the Prime Minister in the meeting stressed the need for undertaking certain measures for properly facing the 2nd wave of the Coronavirus (COVID-19).

Turning to the issue of delay in project implementation, Ashadul said the Prime Minister asked the concerned ministries and divisions to prepare lists about the construction firms and contractors featuring their work history, their volume of works and which firms finish their works in stipulated timeframe or which do not.

The senior secretary said the Prime Minister gave the directive to facilitate emergence of new construction firms and contractors and thus encouraging a healthy competition.

Ashadul said the premier renewed her call to make the roads and highways more sustainable, keeping provision of draining out rainwater from the roads and highways during construction as well as keeping sufficient places along the highways where drivers, helpers and passengers of public and private transports could take rest while traveling.

Referring to the approval of Expansion of cultivation of high-quality grass and transfer of suitable technology for development of livestock nutrition with Taka 116.73 crore, the Planning Division senior secretary said, the Prime Minister termed this project a “good project” as cultivation of high-quality grass will be suitable for livestock development.

Turning to the approval of “Khurushkul Special Ashrayan” project with Taka 1.333.61 crore, the Prime Minister asked the authorities concerned to take measures so that no outsider except the original project beneficiaries get accommodation in the project site.