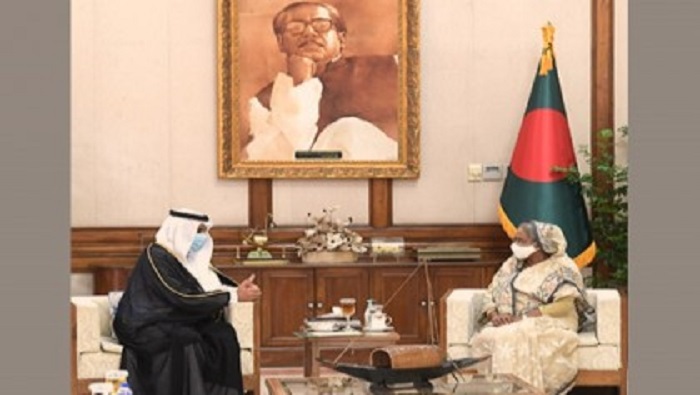 Prime Minister Sheikh Hasina on Thursday said eight “iconic mosques” with all modern facilities will be built in eight divisions of the country with Saudi assistance.

The prime minister discussed the issue when newly-appointed Saudi Ambassador to Bangladesh Essa Bin Yousef Al-Duhailan paid a courtesy call on her at her official Ganabhaban residence this morning.

The prime minister said 560 model mosque-cum-Islamic cultural centres are being constructed at the upazila level with Saudi assistance.

The prime minister said Saudi Arabia has a special place in the hearts of Bangladeshis.

Pointing out the traditional relationship between the two brotherly countries, she said Bangladesh always values these ties. “There is cooperation between the two countries in many sectors,” she said.

The Saudi envoy expressed the hope that the existing friendly relationship between the two countries would deepen further under the leadership of Prime Minister Sheikh Hasina.

He said the bilateral cooperation in the fields of economy, security and manpower between Saudi Arabia and Bangladesh will continue.

Al-Duhailan mentioned that over 1.5 million Bangladeshis are working in different sectors in their country. “They’re very hard-working and making immense contributions to Saudi economy,” he said.

Referring to the existing investment-friendly atmosphere in Bangladesh, the ambassador said Saudi entrepreneurs are keen to come to Bangladesh for investment.

He said their government also welcomes Bangladeshi entrepreneurs in Saudi Arabia to promote trade and business between the two brotherly countries.

“There is a huge potential of investment in Saudi Arabia and we’ll extend full support to the Bangladeshi entrepreneurs in this regard,” the ambassador said.

Expressing satisfaction over the existing excellent ties between the two countries, Al-Duhailan told the premier that it will be his responsibility to take forward the relationship during his tenure.

At the outset of the meeting, the premier welcomed the new Saudi ambassador and assured him of extending full support during his stay in Bangladesh.

Later, Bhutanese Ambassador to Bangladesh Rinchen Kuentsyl paid a courtesy call on the prime minister at the same place, the press secretary said.