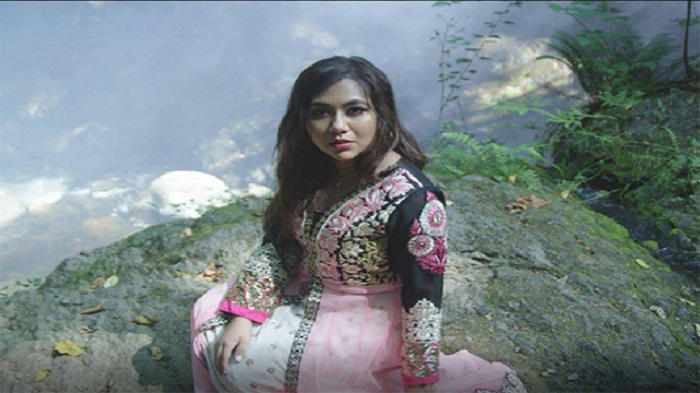 Monolina Binny, a Bangladeshi-US scientist, has launched a Bangla music video titled “Ami Alo” or “I am light” in her efforts to instill everyone into a sense of hope and courage to face uncertainty as the ongoing Covid-19 pandemic onslaughts grasped the entire globe.

A molecular biologist at Oxford Nanopore Technologies, the 29-year-old Monolina along with co-artistes drew on Bengal’s rich Baul and folk traditions of raising awareness through music in her  3.33-minute performance.

“Ami Alo is about consent and finding strength within oneself . . . This song is about resistance in these dark and uncertain times,” said the singer, who as a scientist specializes in next-generation sequencing of DNA/RNA.

Monolina herself is the lyricist, co-composer (along with Richie Beretta from New York City) and musician of the song. The first few lines read: “I am walking ahead with thoughts in my head . . . I am sufficient by myself, I have realized that I am light”.

A large group of technical crew and backstage artistes of different nationalities and diversified cultural backgrounds joined hands with Monolina to produce the video in Bangla.

The video appeared to be the first Bangla film shot with two drones — one fitted with an ultra modern 8K camera and another used for lighting — which flew like a UFO to create a surreal feeling as the singer and co-artistes performed at outdoor spots in the United States.

Monolina said this was the first 8K video made by a Bangladesh born person which was the outcome of her desire to “combine the rich musical heritage of Bangladesh with the latest technology”.

“I want to inspire people, especially women and marginalized communities, to be able to speak up and discuss experiences that may be considered “taboo” in their society,” said Monolina.

She said freedom of expression is a human right and “I want everyone to be able to exercise it with compassion and without reservation” while she simultaneously expects everyone to be kind human beings.

Monolina is currently engaged in planning experiments with Public Health Labs and other institutions globally to track Covid-19 transmission through genetic sequencing and evolution study of SARS-CoV-2 virus.

“(Simultaneously) I am working with a team and supporting labs to finish sequencing a variety of different species ranging from microbes to the human genome and our team is helping NASA for in situ life detection,” she said.

The young Bangladeshi scientist pointed out that the first DNA sequencing in space was done with Nanopore Technology and she was proud to be a stakeholder of the study.

Monolina said she intends to continue to work towards the goal of creating an “internet of living things”, which is developing the capacity to pave the way for many medical applications, fitness management, severe diseases maintenance, and many others.

“At the same time, art is equally important to me as through art I am able to exercise my right to freedom of expression. My thoughts and experiences come out in many forms – music, dancing, painting and poetry,” she said.

On the other hand, Monolina said, being a “Bengali woman of color, I want to draw on my own experiences to empower and help represent minorities, especially women of color”.

Daughter of an architect father and geographer mother with specilisation on social and environmental safeguard issues, Monolina had her schooling in Dhaka ahead of moving to the United States for higher studies in molecular biology.

She had her basic music lessons at “Chhayanot” while mystic singer Lalon Shah appeared to have largely dominated her personal philosophy, inspiring her to currently work on disseminating his message to the global community through translated version of Lalon songs.