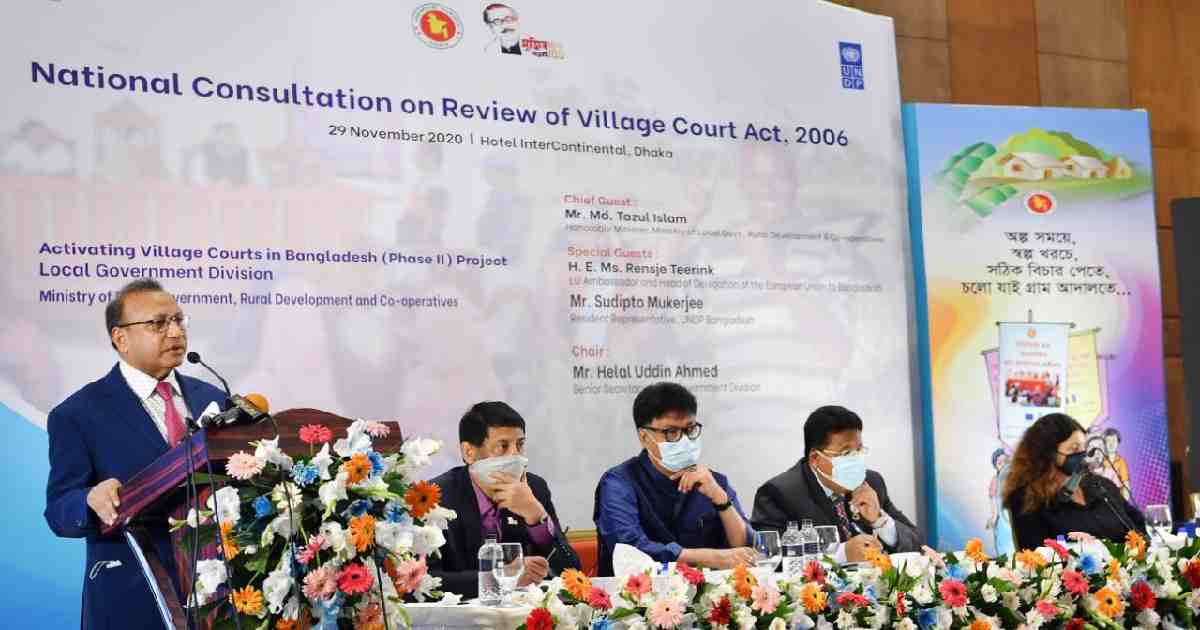 The government has undertaken an initiative to amend the Village Court Act,  2006 in order to make village courts more efficient, citizen-friendly and fitting for the modern age.

With an aim to finalising the reforms and amendments to the legal infrastructure, an advisory meeting was held on Sunday at a Dhaka hotel with the support of the European Union and United Nations Development Programme (UNDP).

Moderated by Senior Secretary Helal Uddin Ahmed of the Local Government Division, the meeting was attended by Local Government, Rural Development and Co-operatives Minister Tajul Islam as the chief guest.

LGRD and Cooperatives Minister Tajul Islam said after the Village Court act was brought into effect in 2006, the first revision came in 2013, and in 2016 the ordinance was issued.

In light of the learning from the meeting along with field-level implementation, the minister hoped that the speakers’ informed opinions would help strengthen the justice delivery mechanism of village courts and significantly reduce the number of cases at district-level courts.

Supreme Court advocate and Advisor to AVCB-II project’s amendment initiative, Tajul Islam, mentioned in his key remarks that the primary reason behind rectifying this law is to increase the financial jurisdiction of village courts, bring parity with other relevant laws and increase clarity, make the village court process simpler, ensure accessibility and participation of women in the service and decision-making aspects of the village court, and add subjective jurisdiction to increase the scope for dispute.

The Activating Village Courts in Bangladesh (AVCB) project took off in 2013 at 350 unions of 12 districts to ensure justice for the masses, according to UNDP.

Building upon its huge success, phase-II of AVCB launched in 2016 at 1,080 unions of 128 Upazilas in 27 districts across eight divisions.

National Project Director of AVCB-II, Maran Kumar Chakraborty said, “The unprecedented success of village courts is reflected in its disposal of over two lakh cases, including over 10,000 cases transferred from the district courts. This is making a huge contribution to reducing pressure on the higher courts.”

Rensje Teerink said EU is a tried and tested partner in Bangladesh’s development.

“We hope the amendment to this act will not only ensure smoother operation at the village courts but also ensure justice for people,” she said.

Sudipto Mukerjee said, “Village courts have become a popular mode of accessing justice in the informal system. This initiative will make strides in achieving the Sustainable Development Goals (SDGs) by ensuring better access to justice for all citizens.”

He thanked EU, the government of Bangladesh and LGRD ministry for their continued support.

Senior Secretary Helaluddin Ahmed said the participation of women in the legal system has been ensured through village courts.

“Not only are women empowered to access justice, but they are also participating in the decision-making process as part of the judging panel. The government is committed to further developing the village courts. At the District Administrators’ Convention in 2018 and 2019, the Prime Minister directed the activation of village courts to ensure justice for rural people and remove the backlog of cases.”