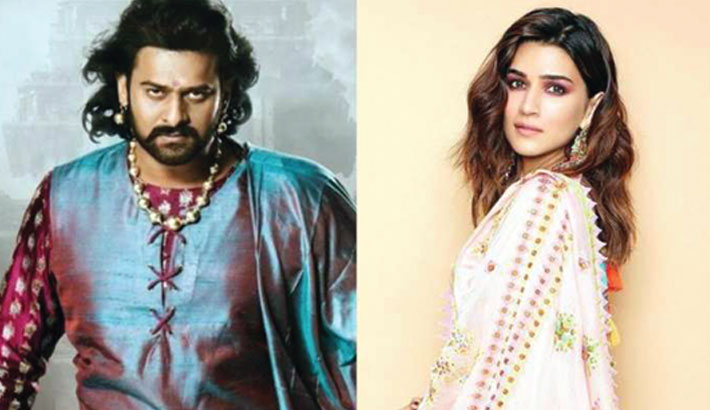 Kriti Sanon has bagged a major role opposite Prabhas in the upcoming film, Adipurush. The Bareilly Ki Barfi actor has now been confirmed for the role of Sita in the big banner film, reports Hindustan Times.

While Prabhas plays the protagonist Ram, Saif Ali Khan has been signed for the role of the antagonist, Lankesh. Speculations were ripe that names such as Anushka Shetty, Anushka Sharma, Kiara Advani and Keerthy Suresh were being considered for the role of Sita before Kriti was finalised for the part.
A report in Mumbai Mirror has quoted a source as saying, “She (Kriti) will play the character with grace and dignity. Playing Sita is an opportunity of a lifetime for her, and she immediately came on board. She will be juggling multiple films in the first quarter of 2021.”

Adipurush will reportedly be shot from January 2021 in one long schedule. Talking about shooting the film in 3D, the source said, “It will mostly be shot in the studio against a chroma screen. Om and Bhushan have been talking to VFX technicians of international repute, who have worked on films like Avatar and Star Wars, to make the shooting process smooth and mount the film on a certain scale.”

Adipurush will hit the theatres in the country on August 11, 2022. Backed by Bhushan Kumar’s T-Series, the multilingual period saga is an onscreen adaptation of the Hindu epic Ramayana. It is being touted as a film celebrating “the victory of good over evil”. It is Om Raut’s follow-up project to his blockbuster movie Tanhaji: The Unsung Warrior, which released in January this year. To be shot in Hindi and Telugu, Adipurush will be dubbed in Tamil, Malayalam, Kannada, and several other foreign languages.

Kriti was last seen in Ashutosh Gowariker’s period drama, Panipat, in which she played the female lead Parvati Bai. She currently has multiple projects in her kitty, including Mimi, in which she plays a surrogate mother. She even gained 15 kilos to play a pregnant woman on screen. She will also begin the shooting of Akshay Kumar-starrer Bachchan Pandey in January.