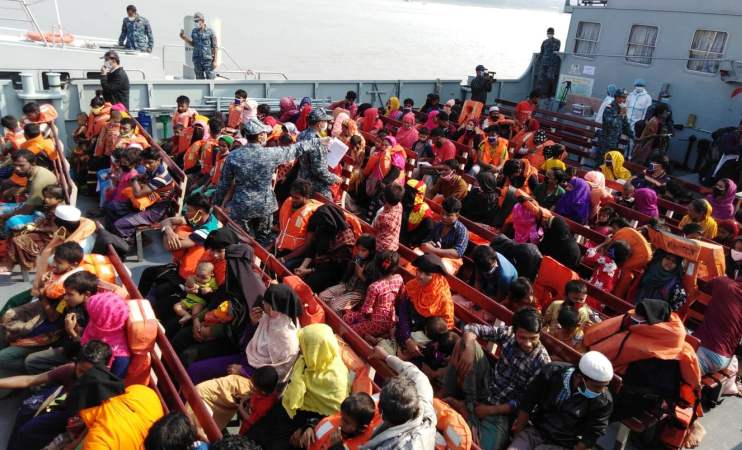 Some 1642 Rohingyas boarding seven ships from Chattogram started journey for Bhasan char, an island around 37 miles off the coast of Bay of Bengal under Hatiya upazila of Noakhali.

He said two vessel and two defender boat and four country boat are giving Scots to the caravan.

Earlier on Thursday, they reached Chattogram from Cox’s Bazar, where they have been staying since 2017. They stayed overnight at BF base Zahur in Chattogram.

The Navy has prepared the Tk 3,100-crore housing project, funded with public money, after some 750,000 Rohingyas fled a brutal military campaign in Myanmar’s Rakhine state and took shelter in Cox’s Bazar in the months following August 2017.

They joined some 300,000 other Rohingyas, who had fled previous waves of violence in Rakhine.

The UN and various rights groups alleged that they have limited information about what has been going on and that the government has yet to allow a technical team to assess the feasibility of the housing project in Bhasan Char.

UN and rights groups have been questioning the idea of relocation them to Bhasan Char, saying it is a low-lying isolated island and has risks of flooding, but at a point last year agreed to send a technical team to assess the condition and requested the government to allow the visit before relocation.

In a statement on Wednesday, the UN said it has limited information on the relocation exercise and has not been involved in the preparation process. It said it is ready for the visit by a technical team and for consultation with the government. The UN also said any relocation should be voluntary and all protection measures must be in place.

2020-12-04
Mr. Admin
Previous: Nestle to invest 3.2 billion Sfr to cut carbon emissions
Next: Vaccine rollout could ease crisis, but who gets it first?

BNP’s Dec 10 rally will be held in Dhaka: Mirza Fakhrul