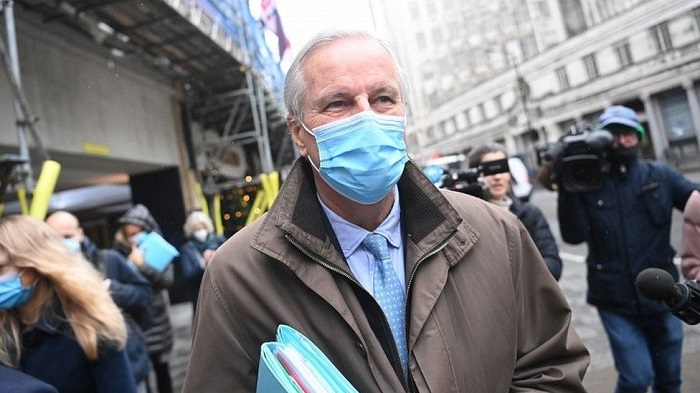 The UK and the EU have resumed talks on post-Brexit trade in London, with time running out to achieve a deal.

A senior UK government source said the prospects of a breakthrough were “receding” and accused the EU of making “11th-hour” demands.

Both sides have to agree and ratify any deal by 31 December, when the current rules on EU-UK trade end.

If they do not, they will do business on World Trade Organization rules, meaning the introduction of tariffs, or taxes on imports.

The negotiating teams are seeking compromises in key areas – including fishing rights and business competition rule – in time for EU leaders to discuss them at a summit scheduled for Thursday.

And, rather than returning to Brussels as planned on Friday, Mr Barnier is staying in London to continue discussions.

Brexit happened but rules didn’t change at once: The UK left the European Union on 31 January 2020, but leaders needed time to negotiate a deal for life afterwards – they got 11 months.

Talks are happening: The UK and the EU have until 31 December 2020 to agree a trade deal as well as other things, such as fishing rights.

If there is no deal: Border checks and taxes will be introduced for goods travelling between the UK and the EU. But deal or no deal, we will still see changes.

What happens next with Brexit?

He added that the UK must be recognised as “a sovereign and independent nation” and it was “on the basis of that that a deal will be done”.

Fishing rights remain a major area of contention between the UK and France – one of the EU’s most powerful members.

France’s Europe minister, Clement Beaune, warned that his government could “veto” any deal reached between the UK and EU, if it did not satisfy his country’s demands.