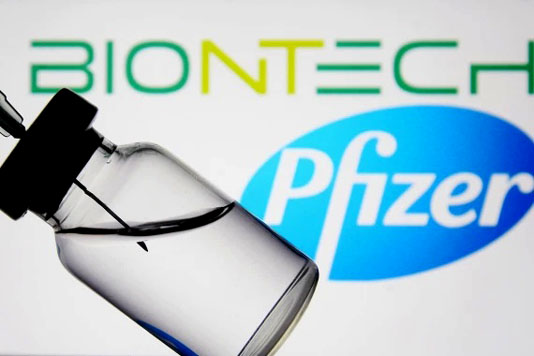 Bahrain announced on Friday that it had approved the emergency use of the Pfizer-BioNTech coronavirus vaccine, becoming the second country after Britain to green-light the drug.

“The approval of the Pfizer/BioNTech vaccine will add a further important layer to the kingdom’s national Covid-19 response,” said Mariam al-Jalahma, CEO of the National Health Regulatory Authority, according to a statement carried by the official Bahrain News Agency (BNA).
Manama did not specify when it would begin the rollout of the vaccine by US pharmaceuticals giant Pfizer and its German partner BioNTech.

Britain on Wednesday said it approved the Covid-19 vaccine for general use, with plans to start rolling it out next week.

In November, the small Gulf kingdom of Bahrain approved the use of China’s Sinopharm vaccine on frontline healthcare workers.

Bahrain has so far recorded more than 87,000 novel coronavirus cases, including 341 deaths.

“This authorisation is a goal we have been working toward since we first declared that science will win,” said Lindsey Dietschi, Pfizer representative in the Gulf, according to BNA.

Britain insisted Friday its world-first approval of the Pfizer-BioNTech coronavirus vaccine met all safety standards, striving to tamp down any public unease after US and European officials queried the rapid process.
Companies have been racing to find a vaccine for the coronavirus, which has killed over 1.5 million people and infected more than 65 million since it emerged in China in December of last year.