Bhasan Char a heaven for Rohingyas 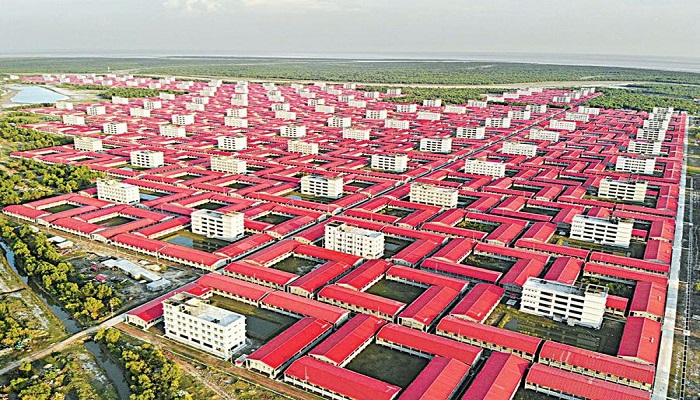 “I never dreamt of getting such a beautiful room for living at Bhasan Char,” said Mohammad Mahmudullah in a joyous expression after spending a night on the island.

The government on Friday took some 1,642 Rohingya people to the island as part of its move to temporarily relocate them for better living.
“Such facilities will not be provided for us anywhere in the world. The place is a heaven for us as we have got the taste of freedom here,” Ullah told Daily Sun with a big smile. “I do not want to go back from the island,” said Ullah who along with his four-member family came to Cox’s Bazar camp in 2017 to avoid the persecution of the Myanmar authorities.

Rohingyas living in camps are passing hard time as they cannot move freely.

Expressing their satisfaction with Daily Sun, a good number of Rohingya people said that they did not expect such a healthy environment as many discouraged them to come to the island.

They said that they would also request their near and dear ones to come to the island for better living and get the taste of freedom.

Echoing with Ullah, Ms Fatema said she spent the night with mental peace.

“It is beyond my imagination to get a concrete room and live there. But I have got an opportunity. I am very happy,” said the middle-aged woman.
Mohammad Hossain was gossiping with his fellows on the open spaces in front of his room. He came here leaving his parents and the family of his brother at the Balukhali camp.

“I am feeling good. I will again go to Cox’s Bazar and bring them too. If they do not want to come here, I must return here,” he said.

Mohammad Zobaer never thinks of such a healthy environment of the island. “I do not dream of living in such a house. I express my gratitude to the government and the Almighty for giving me the opportunity.”

The government developed the island at the cost of Tk 31,000 million to provide accommodation to some one lakh Rohingyas.

Rooms built for the temporarily relocated Rohingyas were handed over on Friday.

Their eyes were glittering with joy after entering their new houses.

Many discouraged us not to come to the island saying that the area will be submerged and we will be washed way…. Crocodiles will take us.

“But all the fear have gone away as all have given wrong messages. I am feeling much better,” he said, adding that he would manage livelihood through cultivation.

Bangladesh is currently hosting over 1.1 million Rohingyas, who fled Myanmar and took shelter in Cox’s Bazar in the face of ethnic cleansing and genocide by Myanmar security forces from August 25, 2017.

Talking over daily needs, the authorities concerned ensured they would stand by the Rohingyas on the island with all necessary facilities.