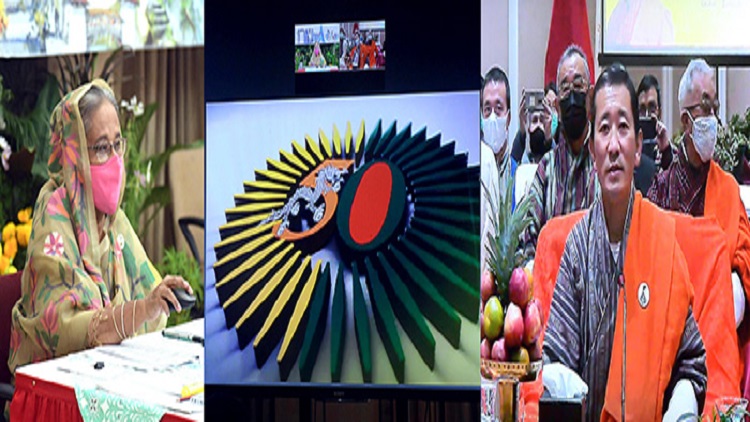 Prime Minister Sheikh Hasina has offered Bhutan to use its existing ports and newly developed Syedpur regional airport for mutual benefits of the two countries.
She said, “We are developing our Chilmari port and Pangaon Port in Narayanganj. Not only that, if wants, Bhutan can use any of our three ports – Chattagram, Mongla and Payra. We are developing a regional airport in Syedpur. For Bhutan, it is open. If you wish you can use it too.”
Prime Minister said this while addressing the Bangladesh-Bhutan PTA Signing Ceremony and Celebration of 50 Years of Relationship between the two countries on Sunday, reports BSS.
Sheikh Hasina said the Bangladesh-Bhutan Preferential Trade Agreement (PTA) would further consolidate the relations between the two neighbouring countries for mutual benefit.
“The PTA which both sides signed today will contribute to further consolidating the relations between our two countries,” she said.
She added that the PTA signing was held today to make the day memorable as on this day in 1971, Bhutan became the first country in the world to recognise Bangladesh’s independence and it marks the 50th anniversary of bilateral and diplomatic relations between the two countries.
“It is time to make our extraordinary relations even more meaningful for mutual benefits and for the overall development and well-being of our citizens. It is in this spirit that we have signed today the Bangladesh-Bhutan PTA,” said the PM.
Noting that it is a historic moment, she said Bangladesh is signing its first ever PTA with any country in the world and this country is also the first country that recognized Bangladesh as a sovereign and independent state after the War of Liberation in 1971.
Under this agreement, Sheikh Hasina said, a wide range of products from Bangladesh and Bhutan can find duty-free entry into each other’s markets, adding that the PTA also has a provision for including an additional list of products through mutual consensus.
“Once the agreement comes into force, I believe more people in Bangladesh can have access to fresh Bhutanese apples and oranges, while the fashion-conscious people of Bhutan can choose from more varieties of quality apparels from Bangladesh,” she hoped.
The PM also said that infrastructure projects in Bangladesh can further benefit from boulder stones from Bhutan, while Bangladeshi pharmaceuticals can increase contribution to the health sector in Bhutan.
Besides, Bangladesh and Bhutan share ancient linkages, common cultural values, tradition and geo-political realities. Today, the areas of cooperation are many, including trade, tourism, hydro-power, climate change impacts, health, bio-diversity, agro-processing, agriculture, ICT, education, water resource management and much more, she continued.