5G roll out has run into a catch-22 situation 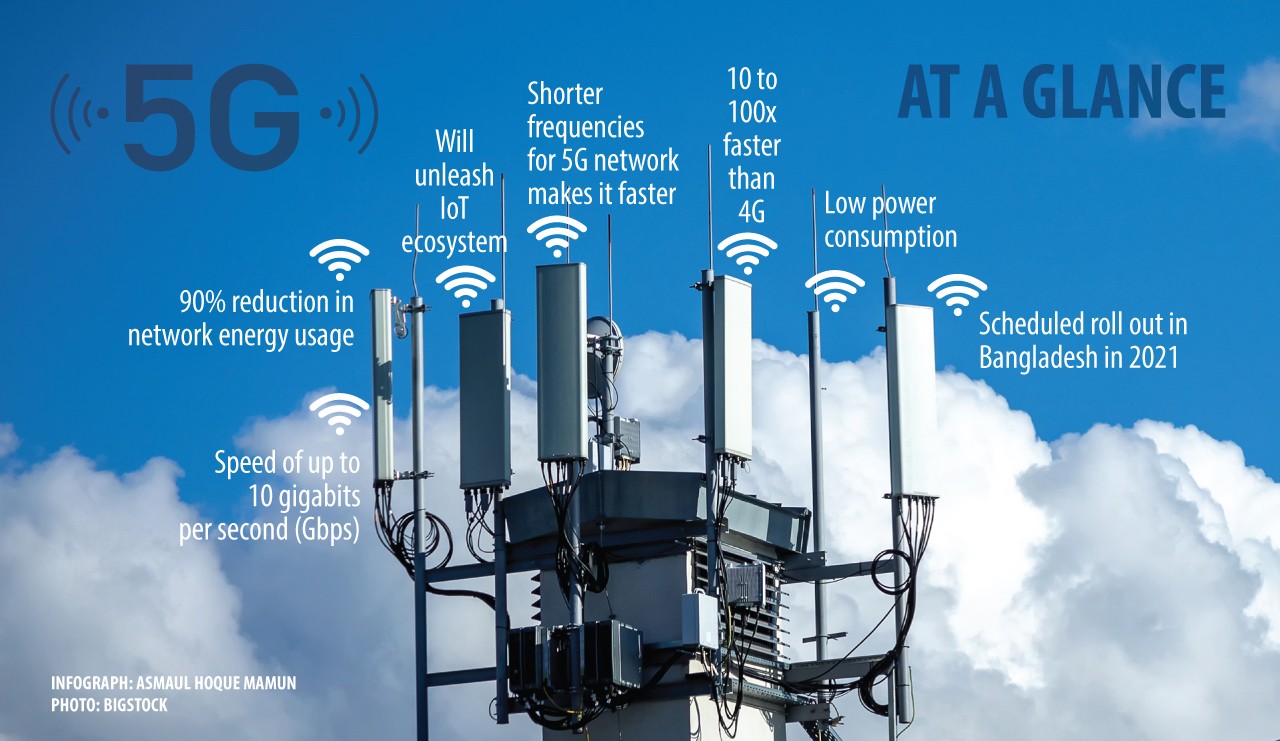 Without compatible handsets, mobile operators don’t have much of a business case, while handset brands don’t want to sell 5G handsets when there is no network to enjoy

Don’t repeat the same mistake and expect a different result — it is often said. And seeing the preparation in place for the planned 5G rollout in Bangladesh in early 2022, one can’t help but evoke that saying.

One of the primary reasons why both 3G and 4G services failed to take off in a big way commercially was the low penetration of compatible handsets when those technologies were rolled out in Bangladesh.

And in case of 5G, the handset penetration at less than 0.1 per cent is worse than the other two technology when the mobile operators were gearing up to roll them out, meaning there is not much of a business case for them to undertake the massive investment needed for the service.

Over in neighbouring India, which is expected to get the next generation of telecom networks towards the end of 2021, i.e. around the same time as in Bangladesh, 5G smartphones are increasingly becoming mainstream, meaning its mobile operators are now anticipating a robust user base well before the roll-out of services.

Since early this year, all leading brands have begun rolling out 5G handsets in India, starting with the premium end of their portfolio. In the July-September quarter, more than 1 million 5G smartphones entered India, reports Business Standard.

While Samsung entered the segment with Galaxy S20 Ultra, Xiaomi launched the Mi 10 5G, Vivo marked its presence with its sub-brand Iqoo, while Oppo began moving towards 5G with multiple devices. OnePlus Technology rolled out the 5G-compatible OnePlus 8 series.

Realme has lined up half a dozen 5G phones, and Apple has rolled out the iPhone 12 series.

Save for Samsung, those brands have no plan yet to introduce 5G handsets to Bangladesh.

Earlier in August, Samsung rolled out the Galaxy Note20 Ultra 5G, which is manufactured in Bangladesh by Fair Electronics, its local assembly partner.

The phone retails at Tk 134,999 and hence has found very few takers.

“It is an expensive handset. People just come and check it out and then leave. We get very few customers for this phone,” said Nahid Sheikh, a sales advisor at a Samsung store in the capital’s Bashundhara City Shopping Complex.

The store sells 5-8 units of the Samsung 5G handset in a month.

Badhon Hossain, manager of a Realme store in the same shopping centre, said they have plans to import 5G handsets in the middle of 2021.

Oppo has the same plans, according to Joshita Sanjana Rizvan, PR & communications manager of OPPO Bangladesh.

Shakib Arafat, managing director of Salextra, the local distributor of Motorola, which recently made its re-entry to Bangladesh after a ten-year hiatus with the Moto G8 Power Lite, said there are no plans to bring the Motorola Razr 5G handset, which was recently launched in India with a price tag of Rs 1.24 lakh.

Xiaomi will only bring 5G handsets when the network is all set for roll-out, said Ziauddin Chowdhury, the general manager of Xiaomi Bangladesh.

“We know what the demand is for 5G handsets and will not take any risks by shipping them in now,” said Kayes Khan, manager of Xiaomi’s store in Bashundhara City.

The 5G market in Bangladesh is not ready yet, said Rezwanul Hoque, former secretary-general of the Bangladesh Mobile Phone Importers Association.

“Once the 5G network is established in the country, we will start bringing in 5G handsets,” said Hoque, also the chief executive officer of Transsion Bangladesh, which makes the Chinese brand Tecno’s smartphones and itel feature phones in Bangladesh.

The handset sellers’ stickiness in bringing 5G compatible handsets have given rise to a chicken-and-egg situation.

Currently, less than 30 per cent of the handsets in use in Bangladesh are compatible with 4G, the existing technology.

The penetration needs to be at least 60-70 per cent before the introduction of 5G for the massive investment needed for the rollout to make a proper business case, mobile operators and stakeholders told Dhaka Tribune on condition of anonymity to speak candidly on the matter.

The government has prepared a roadmap on 5G launching in Bangladesh by the next couple of years and policy formulation work is going on, said SM Farhad, secretary-general of the Association of Mobile Telecom Operators of Bangladesh, a national trade organisation representing all mobile telecom operators in the country.

“But we are far behind in handset availability. For instance, the 4G handset penetration in Bangladesh is currently about 35 per cent only.”

For 5G handset penetration to increase, the policymakers have to consider the tax regime and the telecom ecosystem, he added.

“If there is no 5G handset, is it possible to ensure 5G network across the country?” asked Taimur Rahman, chief corporate and regulatory affairs officer at Banglalink, the country’s third-largest mobile operator.

The issue of high taxation is a big barrier to mobile operators, he said.

“We also hope that the regulators will consider the price of the spectrum, as more spectrum will be needed to run 5G. Moreover, some of the existing policies and acts in different industries are contradictory.”

In Bangladesh, there are different policies for ICT and telecommunications.

“While the new National Telecom Policy is pretty forward-looking, the Act is not. These things need to be streamlined to ensure a proper regulatory framework for 5G. Without the proper support from regulatory authorities, we will not be able to roll out 5G properly,” Rahman added.

If 5G network and 5G handset do not come at the same time, the roll-out will be a failure, according to Shahed Alam, the chief corporate and regulatory officer at Robi, the country’s second-largest mobile operator.

“We have to discuss more how we can all work together as the government has plans for digital Bangladesh.”

Ensuring last-mile fibre connectivity and increasing the spectrum are also crucial for 5G to prosper, he said.

“Some countries get free spectrum for establishing a strong network. We just asked for the government’s support,” Alam added.