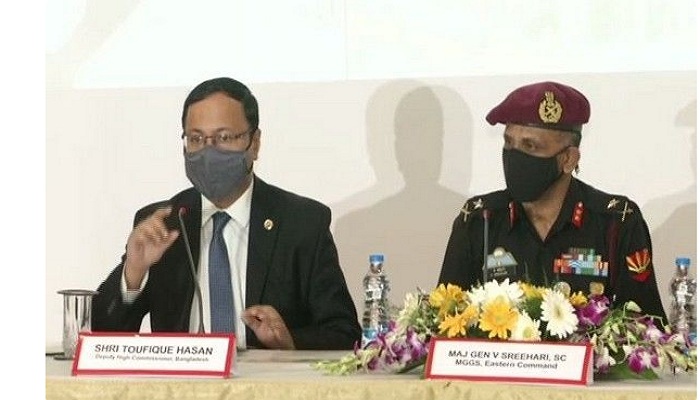 The Eastern Command on Saturday hosted a curtain raiser event for Victory Day at their headquarters in Fort William, Kolkata, to mark India’s victory in liberating Bangladesh from Pakistan almost 50 years ago.

While speaking to the media, Hasan thanked the Eastern Command for the invitation and informed that a 30-member Bangladeshi delegation would be coming to attend the victory celebrations from December 14 to 18.

“50 years back, we got our long-cherished independence after a nine-month bloody war, and we got all of our support from the Government of India, their moral and diplomatic support, their material support. They also gave us shelter, as around 1 crore people came here from Bangladesh during that time. I really feel proud that as I am serving here in the Kolkata mission as the Bangladesh High Commissioner, which is the first Bangladesh mission abroad” he said.

He recalled the services of Sheikh Mujibur Rahman, known as the ‘Father of the Nation’ of Bangladesh, and paid tributes to the freedom fighters who laid down their lives in the war against Pakistan.

The Bangladesh deputy high commissioner also highlighted the significance of the Eastern Command Headquarters, saying that it had a lot of historic attachment and is like a heritage building for Bangladesh.

Meanwhile, emphasising on the historic significance of the war, Sreehari said that it was a very good example of people’s aspirations and Indian support with decisive military action which led to the birth of a new nation.
“The credit of the victory must be shared equally by the people of Bangladesh and the Armed Forces. The Vijay Diwas is a solemn occasion where we remember the sacrifices of the Armed Forces, the Mukti Bahini (Bangladeshi freedom fighters) as well as the people of Bangladesh,” he said.