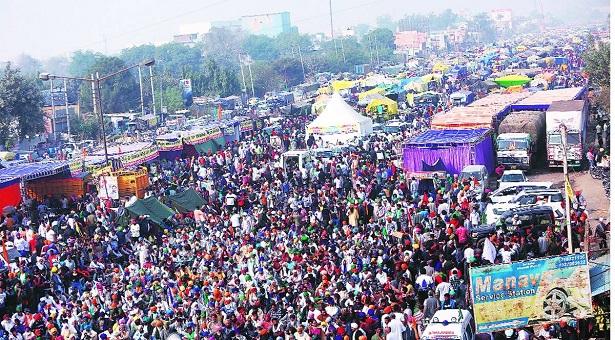 A country-wide strike called by farmers in India has begun amid a standoff with the government over new market-friendly reforms.

Tuesday’s strike follows three rounds of inconclusive talks between the two sides over laws that farmers say are against their interests.

Thousands of them have laid siege to capital Delhi for the last 12 days choking almost all the entry points.

At least 15 opposition parties have backed the call for the strike, reports BBC.

Another round of talks is expected on 9 December.

The governing Bharatiya Janata Party (BJP) has said the reforms, which allow private players a greater role in the farming sector, will not hurt farmers’ incomes.

But farmers are unconvinced. In recent weeks, thousands of them marched upon Delhi, in a convoy of tractors and on foot.

They were met at the border by barricades and clashed with police and paramilitary troops to enter the capital.

Most of the protesting farmers are from the northern states of Punjab and Haryana, and belong to the country’s richest agricultural communities. Their campaign has found resonance on social media, and among the influential Sikh community in Punjab and overseas.

Although they were later allowed to enter the city, thousands of them are still at the borders, vowing not to leave until the government rolls back the reforms.

The protest sites have since turned into camps, with entire families cooking and sleeping in the open.

The protests come even as the pandemic rages in India – although case counts have been dropping nation wide, Delhi has seen a sharp uptick in recent months.

Images of thousands of elderly farmers from Punjab and Haryana – known as the “food bowl” of India – being tear-gassed and sprayed with water in the winter could have won them tremendous public sympathy in India and also from the diaspora around the globe.

The farm bills roiled the country’s parliament when it was passed in September, which led to the suspension of eight opposition members.

What do the reforms propose?
Taken together, the contentious reforms will loosen rules around the sale, pricing and storage of farm produce – rules that have protected India’s farmers from an unfettered free market for decades.

They also allow private buyers to hoard essential commodities for future sales, which only government-authorised agents could do earlier; and they outline rules for contract farming, where farmers tailor their production to suit a specific buyer’s demand.

One of the biggest changes is that farmers will be allowed to sell their produce at a market price directly to private players – agricultural businesses, supermarket chains and online grocers. Most Indian farmers currently sell the majority of their produce at government-controlled wholesale markets or mandis at assured floor prices.

These markets are run by committees made up of farmers, often large land-owners, and traders or “commission agents” who act as middle men for brokering sales, organising storage and transport, or even financing deals.

The reforms, at least on paper, give farmers the option of selling outside of this so-called “mandi system”.