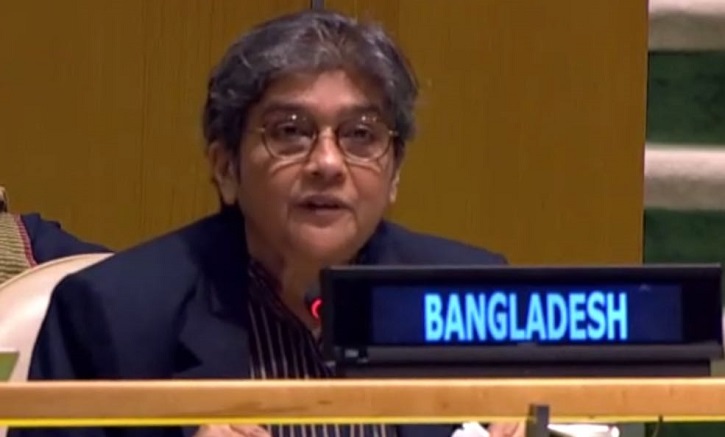 Permanent Representative of Bangladesh to the United Nations Ambassador Rabab Fatima has said determination of outer continental shelf will enable Bangladesh to explore the natural resources, which is critical for achieving our development agenda.

Ambassador Fatima said this while speaking at the 38th Plenary Meeting of the 75th General Assembly of the United Nations held on Tuesday (Dec 8) at the UNHQs, under the agenda item, “Law of the Sea”.

In her statement to the General Assembly, she referred to the recent submission of Bangladesh to the Commission on the Limits of Continental Shelf and expressed hope that the delineation of outer limit of Bangladesh’s continental shelf would unleash new opportunities in our pursuit for ‘blue economy”.

Under the leadership of Prime Minister Sheikh Hasina Bangladesh has already resolved its maritime boundary disputes with India and Myanmar, and has also submitted technical information in support of its outer continental shelf in the Bay of Bengal to the UN.

Focusing on other important issues related to ocean, especially sea-level rise, Bangladesh Ambassador pointed out that that the continuous sea-level rise would exacerbate existing vulnerabilities relating to water and food security, health, and livelihoods, impeding timely achievement of the 2030 Agenda.

However, “the solution lies with us, as the dominant causes behind sea-level rise are mostly human induced” – added the Ambassador.

Referring to the extreme vulnerability of Bangladesh to climate-induced sea level rise, the Ambassador shared various initiatives undertaken by the government of Bangladesh including the adoption of Climate Change Strategy and Action Plan in 2009.

“Bangladesh is at the final stage of enacting Maritime Zones Act, to ensure efficient utilization, conservation, and scientific management of our marine resources”, she added.

Mentioning ocean and its vast resources as our global ‘commons’, Ambassador Fatima emphasized on the need to ensure a balance between the equitable and efficient utilization of ocean resources, the conservation of marine resources, and the protection and preservation of the marine environment, including by early conclusion of an international legally-binding instrument on the conservation and sustainable use of marine biodiversity in the areas beyond national jurisdiction.

Bangladesh Ambassador also stressed on the need for capacity building of and technical assistance to developing nations for the implementation of legal and policy framework in addressing sea-level rise, addressing continued threats to maritime security including irregular maritime movement in the seas, among others and fostering integrated cooperation and coordination at international, regional and local levels, especially in support of the developing and small island states, and coastal communities to build back better from the impacts of COVID-19.

The General Assembly adopted two resolutions on law of the seas and marine fisheries.

Bangladesh supported both the resolutions.