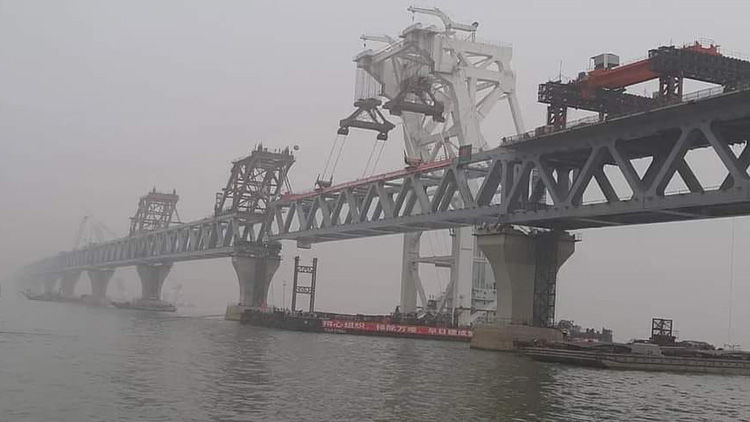 The last span of the Padma Bridge was installed on pillars 12 and 13 at Mawa point on Thursday morning linking both sides of the mighty Padma river as the country’s people get closer to having their long-cherished dream come true.

The multi-purpose Padma Bridge is expected to be opened in 2021.

The Padma Bridge is the largest construction infrastructure since the independence of Bangladesh, which was initiated by Prime Minister Sheikh Hasina. The construction work began in December 2014, with its own fund.

The construction of the main bridge is being carried out by China Major Bridge Engineering Company (MBEC) and the river management is being done by the Sino Hydro Corporation of China.

The Padma Multipurpose Bridge Project will change the economic landscape of southwestern Bangladesh if its opening is matched with improvements of energy security and other infrastructure, politicians and industrialists opined.

Padma Bridge is expected to change not only the socioeconomic structure of southern parts of Bangladesh, but it will also create positive impacts on the whole economy of the country. It will also connect many countries of South and Southeast Asia and will contribute to communication, trade, industry, tourism, and many other sectors in various ways.

2020-12-10
Mr. Admin
Previous: Ayaz murder: One gets jail till death, 5 others life term
Next: Joe Biden’s son Hunter says he is under investigation over taxes