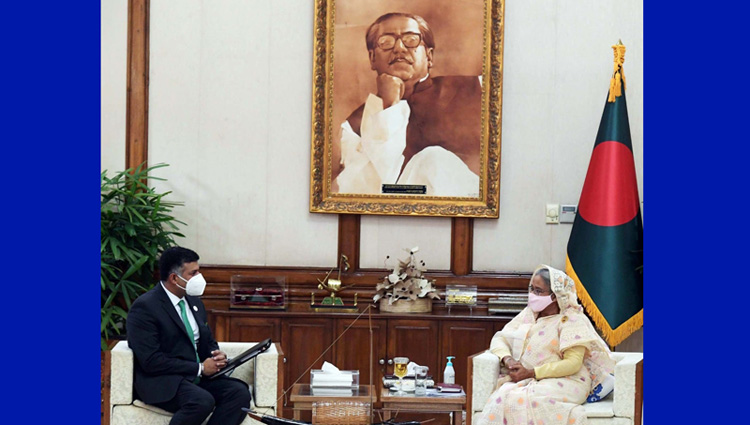 Prime Minister Sheikh Hasina on Thursday laid emphasis on regional development and cooperation, reaffirming that Bangladesh follows its policy – ‘friendship to all, malice to none’.

“I believe in regional development and cooperation,” she said when Indian High Commissioner Vikram Kumar Doraiswami met her at her official residence Gonobhaban.

The Prime Minister mentioned that she follows the policy — “Friendship to all, malice to none.”

Recalling India’s contributions to Bangladesh’s glorious War of Liberation in 1971 and also post-war reconstruction of the country, she said as far as Bangladesh is concerned, all Indians are united in their voice, which was exemplified during the ratification of the much-desired Land Boundary Agreement (LBA) in Indian parliament.

At the meeting, the Indian High Commissioner conveyed the support of the Indian government to Bangladesh’s candidature for the South-East Asia Regional Office (SEARO) of WHO.

Referring to the ongoing process to deliver 30 million doses of Covid 19 vaccine through Seram Institute to Beximco, Doraiswami said they are also willing to increase the capacity of the health professionals of Bangladesh for the effective delivery of the vaccine.

To establish “Golden Bangladesh” as dreamt by Father of the Nation Bangabandhu Sheikh Mujibur Rahman, the Indians are willing to be part of Bangladesh’s development journey, said Doraiswami.

Accordingly, Chilahati-Haldibari rail link, a pre-1965 connectivity line, would be inaugurated along with some other projects during the forthcoming Virtual Summit between Prime Minister Sheikh Hasina and Prime Minister Narendra Modi on December 17.

He referred to the difficulties faced by Bangladeshis in obtaining visas due to the pandemic, and observed that currently 90pc visa categories are open and the remaining ones would also be opened depending on the situation of the pandemic.

The Indian envoy briefed the Prime Minister about the forthcoming activities to commemorate “Mujib Borsho” marking the birth centenary of Bangabandhu, 50 years of independence of Bangladesh and establishment of diplomatic ties between Bangladesh and India.

He also mentioned that all the Indians, including Prime Minister Narendra Modi, possess good wishes for Prime Minister Sheikh Hasina and all the Bangladeshis.

The Indian High Commissioner expressed his profound gratitude for allowing him to meet her.

The Prime Minister thanked and conveyed her regards to her Indian counterpart Narendra Modi.