Trials to test combination of Oxford and Sputnik vaccines 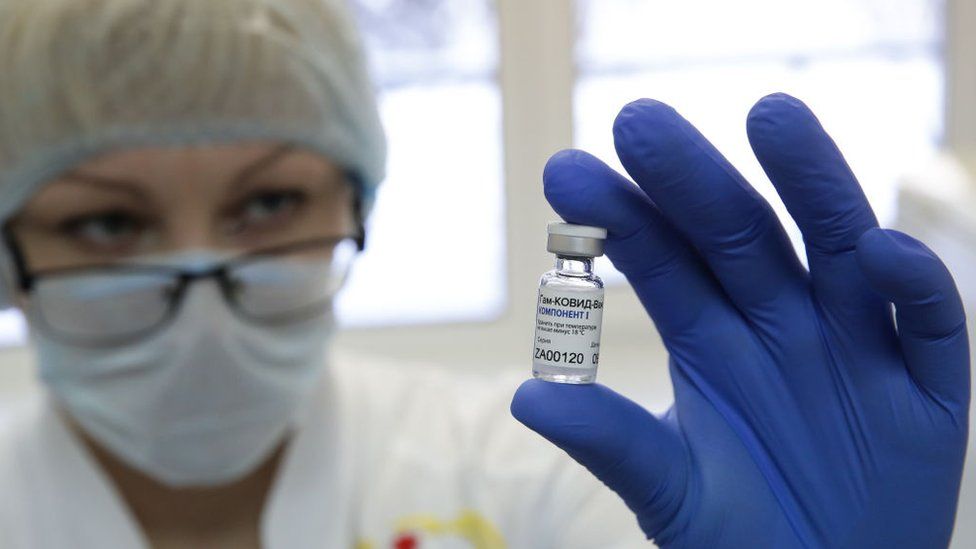 UK and Russian scientists are teaming up to trial a combination of the Oxford-AstraZeneca and Sputnik V vaccines to see if protection against Covid-19 can be improved.

Mixing two similar vaccines could lead to a better immune response in people.

The trials, to be held in Russia, will involve over-18s, although it’s not clear how many people will be involved.

Oxford recently published results showing their jab was safe and effective in trials on people.

The researchers are still collecting data on the effectiveness of the vaccine in older age groups while waiting for approval from the UK regulator, the MHRA.

AstraZeneca said it was exploring combinations of different adenovirus vaccines to find out whether mixing them leads to a better immune response and, therefore, greater protection.

Are two vaccines better than one?

The hope is combining different vaccines will give either stronger or longer-lasting immunity to the virus.

There are reasons to think this might be beneficial for the Oxford and the Sputnik V jabs.

Both use harmless viruses to deliver the important part of the vaccine (a bit of the coronavirus’ genetic code) into the body.

The risk is the body becomes immune to the “viral postman” making the second or booster jab less effective.

This is one explanation for why Oxford had better results from giving someone a half dose followed by a full one, rather than two normal doses.

Other vaccine combinations are also planned in the hope that approaching the challenge from different angles will lead to better results.

The British-made Oxford vaccine, developed in partnership with AstraZeneca, and the Russian Sputnik vaccine, developed by the Gamaleya Research Institute in Moscow, are similar because they both contain genetic material from the Sars-CoV-2 spike protein.

They work differently to the Pfizer-BioNTech vaccine, which has been approved in the UK, Canada, Bahrain, Saudi Arabia and recommended for approval by medical experts in the US.

Early results from late-stage trials of the Sputnik vaccine have shown promising results.

Russia was the first country to register a Covid vaccine for emergency use – in August, despite only having been tested on a few dozen people. It is now being offered to Russians as part of a mass vaccination campaign.

AstraZeneca said it was “working with industry partners, governments and research institutions around the world, and will soon begin exploring with Gamaleya Research Institute in Russia to understand whether two adenovirus-based vaccines can be successfully combined”.