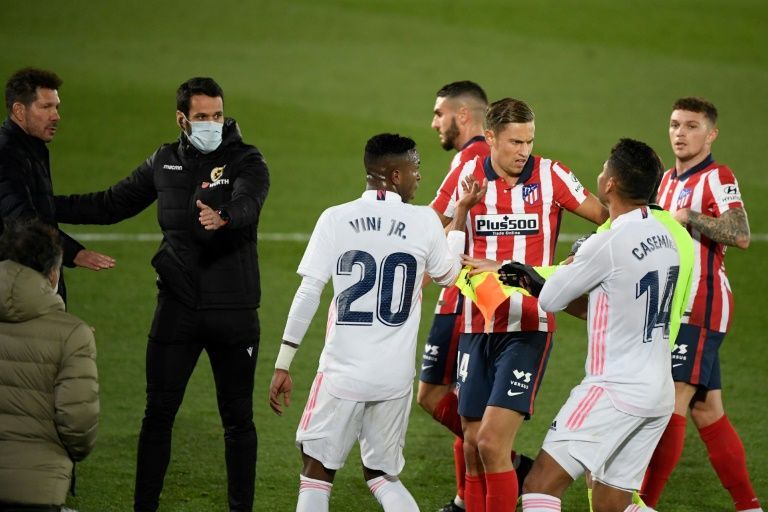 Real, who salvaged their Champions League campaign in midweek by making the last 16, moved to third in the table, three points behind Atletico.

It was a disappointing night for Diego Simeone’s side who had boasted a 26-match unbeaten run in the league, stretching back to February.

That was a run which consisted of 17 wins and nine draws. Real had been the last team to beat Atletico in the league.

“We confirmed the improvement we showed in many areas against Sevilla and Borussia, and gave another good display,” said Real coach Zinedine Zidane, reflecting on his side’s wins in the past week which have helped turn around the season.

“There are criticisms that hurt, but they also make you stronger.”

“We competed very well from minute one until the end, we must be satisfied with work well done.”

His team were in front after 15 minutes when Casemiro headed home a corner from Toni Kroos.

That was reward for Real’s early pressure which had seen Karim Benzema denied by a fine save from Jan Oblak moments earlier.

Atletico, who also made the Champions League knockout round in midweek, struggled to make any impression and star striker Luis Suarez was an anonymous figure up front.

Real went 2-0 up after 63 minutes with Kroos again the provider.

His pass eventually fell for Dani Carvajal who unleashed a 30-metre drive which hit the post but was diverted into the net by the helpless Oblak.

The ‘keeper was credited with an own-goal for his troubles.

It was only the fourth goal conceded by the usually water-tight Atletico defence in 11 league games this season.

It was a night of frustration with Simeone’s men managing just one shot on target.

“We didn’t have the courage to attack, now we have to work and improve.”

“They were better. They were forceful, precise, and when they had their chance, they put them away,” said the Argentine.

Egos too were hurting.

Portuguese star Joao Felix showed his displeasure at being replaced by Saul on the hour.

Suarez allowed himself an ironic smile when he too was benched in favour of Geoffrey Kondogbia in the 73rd minute.

“But I can’t explain his behaviour.”

In stark contrast, Zidane could be especially pleased for Casemiro who had returned from Covid-19 quarantine while Carvajal had recovered from a right leg injury.

It was a night to remember also for captain Sergio Ramos who was playing in a Madrid derby for the 43rd time.

Barcelona are also in action on Sunday against Levante and will be under intense scrutiny.

Barca are in such disarray that they need a victory merely to steady the ship after a morale-sapping 3-0 defeat to Juventus in the Champions League.

The Catalans still qualified for the last 16, but as group runners-up Lionel Messi and his teammates risk drawing one of Europe’s big names.

After the tumultuous summer which almost saw Messi depart, Barca and new coach Ronald Koeman never seem to have recovered.

They sit an unaccustomed ninth in the table with just 14 points from 10 games. They are 12 points behind leaders Atletico.

Goalkeeper Marc-Andre ter Stegen said a win against modest Levante, who have just three points fewer than the Catalans, was essential.

“In La Liga we are not where we want to be but we can claw back some points and that is the aim in the next few weeks.

“We’re playing at home and we can’t afford to drop a single point now.”