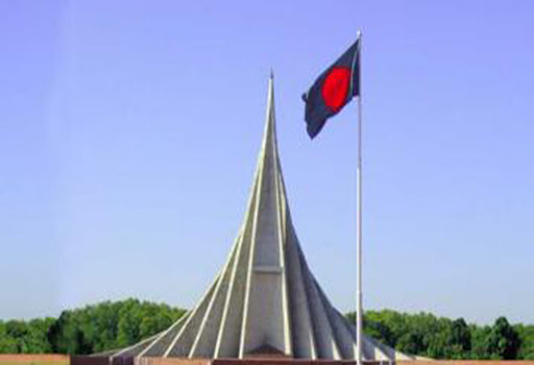 The nation is set to celebrate the 50th Victory Day on Wednesday, the most precious day of the Bangalee people, as the country was liberated from the Pakistani occupation forces on the day 49 years back after a nine-month-long bloodstained War of Liberation.

On December 16 in 1971, Bangladesh was born as an independent country under the leadership of Father of the Nation Bangabandhu Sheikh Mujibur Rahman at the cost of supreme sacrifice of three million people and the honour of nearly half a million women, reports BSS.

Though the pandemic COVID-19 has paralyzed the whole world barring the mankind from attending any public gathering in person, but the celebration of the Victory Day this year has a different dimension as the day is set to be celebrated in the ‘Mujib Barsho’ on the occasion of the birth centenary of Father of the Nation Bangabandhu Sheikh Mujibur Rahman from March 2020-March 2021 just ahead of the country’s golden jubilee of independence to be celebrated in 2021.

Different socio-political, educational and cultural institutions and organisations have chalked out a series of programmes to celebrate the nation’s glorious victory over the Pakistani occupation force.

However, all the programmes this year will be observed following the health guidelines in face of the global pandemic COVID-19.

The government has taken elaborate programmes to celebrate the day at the national level.

The programmes include a 31-gun salute, placing of wreaths at the monuments to pay homage to martyrs, hoisting of the national flags atop all government, semi-government and private offices as well as offices of autonomous bodies across the country, decorating city streets with miniature national flags and colourful festoons, and illumination of important buildings and establishments, roads and street islands at night.

The day is a public holiday.

National dailies will bring out special supplements on the occasion while Bangladesh Postal Department will release memorial postal stump to mark the day.

The state-owned and private televisions and radios will broadcast special programmes highlighting the Liberation War.

Bangladesh missions abroad will observe the day through various programmes.

The victory day celebration had reached a new height following the UNESCO’s recognition of Bangabandhu’s historic March 7th Speech as a part of the world’s documentary heritage in 2017.

On October 30 in 2017, the UNESCO announced the prestigious acknowledgement of one of the world’s most glorious speeches, through which Bangabandhu effectively decelerated the country’s independence in a mammoth public rally at Ramna Racecourse ground (now Suhrawardy Udyan) in Dhaka on March 7, 1971.

The speech inspired the Bengali nation in their quest for freedom and energised freedom loving people for freeing the country through War of Liberation.
2020-12-15
Mr. Admin
Previous: ‘Democracy prevailed’: Biden aims to unify divided nation
Next: Online application for admission in govt secondary schools begins