No division, no anarchy over religion: PM 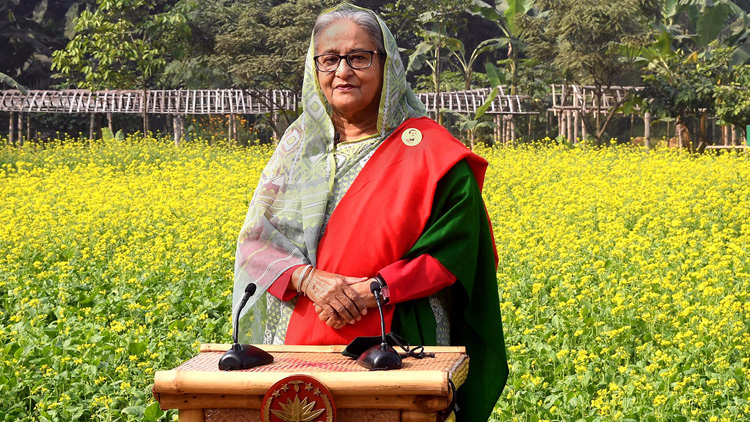 Sheikh Hasina said a section of the defeated force of 1971 recently are out there in the field to confuse the religion-loving Muslims through false, fabricated and fictitious information as they want to create anarchy in society.

“In 1972, the Father of the Nation had said not to make religion a tool of politics. But the associates of the defeated forces are now dreaming of taking the country to the situation it was 50 years back,” Hasina said.

The Prime Minister alleged that these bigots with political patronage are exhibiting their audacity frowning at the government.

“The people of Bangladesh are pious, not fanatics. We must not make religion as the weapon of politics. Everyone has the right to perform their own religious rituals,” she said.

Hasina mentioned that Bangladesh is a country of communal harmony. This country achieved its Independence in lieu of the blood of Muslims, Hindus, Buddhas and Christians. “The people of the country will move on towards prosperity, progress and development keeping the religious morale high.”

She briefly described various development programmes of Bangabandhu and Awami League governments for flourishing Islam in the country after its independence, and its 1996-2001 tenure and over the last 12 years.

In her 18-minute speech, Sheikh Hasina urged all to take a vow on the eve of the Victory Day not to forget the debt of blood of millions of martyrs.

“We must not let the non-communal spirit of the Liberation War fade away. My request to the youth and the new generation is: You must not forget the supreme sacrifices of your predecessors ever, you must not let dishonour the red and green coloured flag that they have gifted [us],” she said.

As their worthy successor, the Prime Minister mentioned, youths must take a vow on this Victory Day to keep the victory flag of their predecessors high forever.

“Take a vow that you’ll transform the country into Golden Bengal imbued with the Liberation War spirit,” she said adding that the souls of 30 lakh martyrs will have peace with this and the dream of the Father of the nation would come true.

Talking about the Covid-19 pandemic issue, the Prime Minister said the country is going to celebrate the Victory Day this year in a different situation.
“We’ve to bring changes in our daily routine due to the coronavirus pandemic. We’re carrying out our personal, social and national activities avoiding public gatherings. Each life is invaluable…the death of a single person due to negligence is not desirable,” she said.

Hasina urged all to perform their everyday works, including the celebration of the Victory Day, following the health and safety rules.

“Make sure that you masked up while stepping out of home and clean hands with soap or sanitiser regularly. Your protection is the safeguard for all,” she said.

The Prime Minister said the whole nation faced the coronavirus unitedly and set an example in the world.

This year, Hasina said, is a disastrous year for the whole world, not only for Bangladesh due to the Coronavirus pandemic as it affected the economy heavily apart from the health system. “The global economy is passing through a tough time. Due to the Coronavirus pandemic, many developed and developing countries are experiencing the negative growth.”

The Prime Minister went on saying, “In Bangladesh, we’ve been able to tackle this adverse shock to some extent with timely steps and programmes. We’ve announced a stimulus package worth Tk 121,000 crore, which is 4.3 percent of the GDP.”

After absorbing the initial hit, she mentioned, the remittance inflow, agricultural production and export have bounced back.

Hasina said the works on mega projects are going on in full swing as the installation of all the spans on the Padma Bridge has been completed, works on metro-rail in Dhaka has resumed in full swing, while the work on Rooppur Nuclear Power Plant has not stopped for a single day during this pandemic.

The Prime Minister said the work on Matarbari Power Plant in Cox’s Bazar and the tunnel beneath the Karnaphuli River in Chattogram are advancing fast and activities to upgrade the country’s highways in four lanes are going on in full swing.

She said the government has changed the celebration programmes of the birth centenary of the Father of the Nation Bangabandhu Sheikh Mujibur Rahman due to the coronavirus.

“Our independence will step into the 50th year next year. Had there been no pandemic, we would have celebrated the Golden Jubilee of Independence in a befitting manner simultaneously with the programmes of the birth centenary of the Father of the Nation,” she said.

The Prime Minister said Bangabandhu used to say that nobody honours a beggars nation.

The Prime Minister said Bangladesh has been able to graduate to the category of developing countries from the least developed one.

Hasina said it was the dream of the Father of the Nation to establish secular Golden Bangladesh which would be free from hunger and poverty.

“We’re at the doorstep of implementing his dream… we’ve to continue this development. With this, we’ll be able to fulfil our dream to become a developed and prosperous country within 2041,” she added.