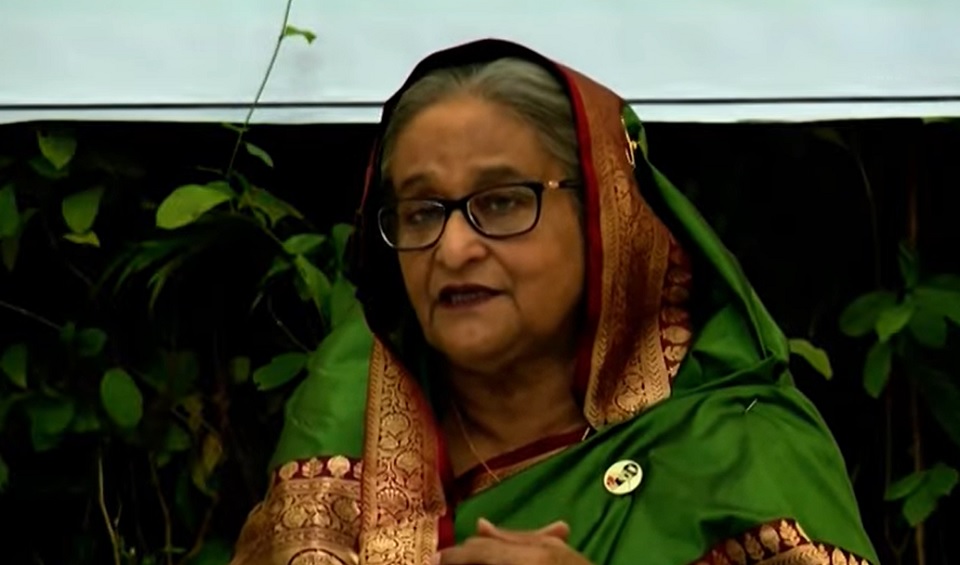 Prime Minister Sheikh Hasina on Wednesday reassured every religious community that Bangladesh equally belongs to the people of all faiths as the country has the shared history of sacrificing blood during its Liberation War.

“The people of all religions will be staying in Bangladesh enjoying equal facilities as they sacrificed blood to liberate the country,” she said.

The Prime Minister said this while virtually addressing a discussion meeting marking the Great Victory Day from her official residence Ganobhaban. Awami League organised the programme at its 23 Bangabandhu Avenue central office.

“There has been an effort to create debate over Bangabandhu’s sculpture… Bangladesh is a country of non-communal spirit,” she said.

Sheikh Hasina reaffirmed that all will have their liberty to perform their religious rituals as the government believes in that spirit.

Turing to the recent debate, she said, “Everybody has to face any situation with patience and that will be our duty, and our main focus will be on what we can do for the country rather looking who said what.”

Sheikh Hasina urged the Awami League leaders and activists to strengthen the party and spread the ideology of the Father of the Nation to the mass people.

About the international prize given in honour of Bangabandhu by UNESCO, she said the organisation announced the award in the name for erasing which from history there was an ill-effort. “I think his is a great gift for the Bangalee nation in the Mujib Centenary.”

The United Nations has decided to establish “UNESCO-Bangladesh Bangabandhu Sheikh Mujibur Rahman International Prize in the field of the Creative Economy” to promote creative industries that provide youths, women and migrants with sustainable jobs globally.

UNESCO Executive Board adopted Bangladesh’s proposal for establishing the prize at the 210th virtual session on December 11.

This is the first time any UN agency introduced international prize in the name of Bangabandhu.

The prize worth $50,000 will be given once in every two years. The award, for the first time, will be given during UNESCO’s 41st general meeting in November next year, which has also been declared by the UN as the “International Year of Creative Economy for Sustainable Development”.

Primarily, the prize will be given for six years and then UNSECO can renew. A five-member jury board comprised of eminent experts will finalize the persons or institutions for the prize.

The Prime Minister said the government wants to keep up the pace of the country’s current advancement, and urged all to stay safe and follow the health instructions to avoid Coronavirus infections.

“The government is discharging its duties…it has provided stimulus packages and extended necessary support to people as it was urgently needed to maintain the lives and livelihoods” she said.

Talking about Covid-19 vaccine, Hasina said the government has already signed a deal to procure it once it is available.

2020-12-16
Mr. Admin
Previous: Wales to go into full lockdown after Christmas
Next: Bangladesh and December