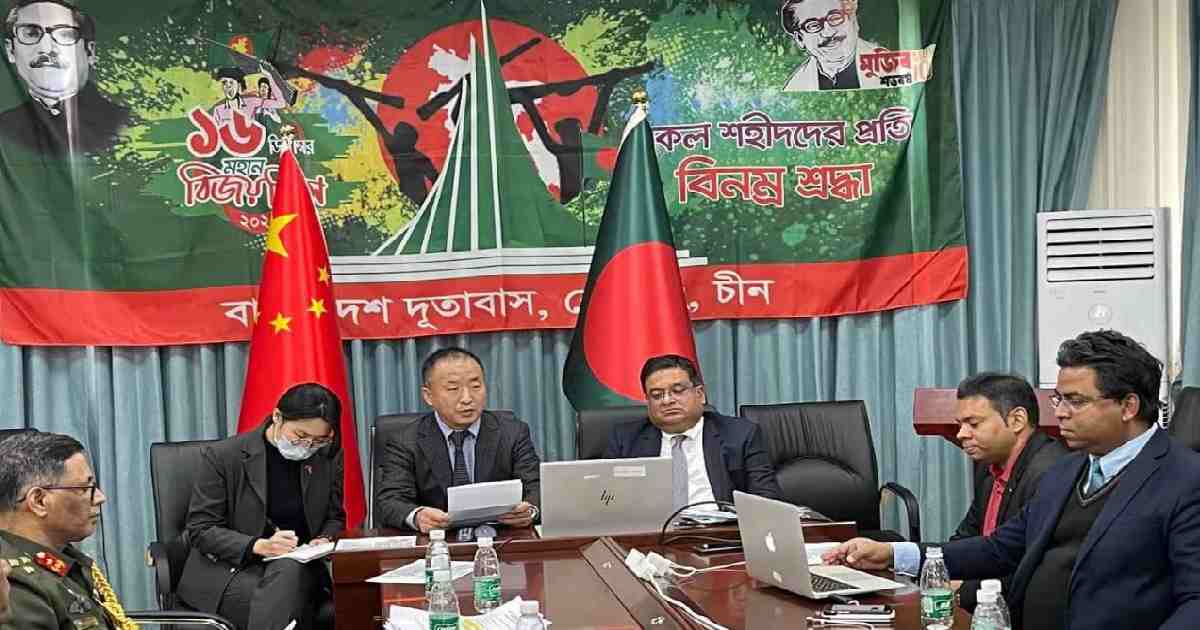 Bangladesh Embassy in Beijing observed the glorious Victory Day of Bangladesh in a befitting manner on Wednesday.
The day’s programme was initiated through the hoisting of the national flag amid the national anthem by Bangladesh Ambassador to China Mahbub Uz Zaman.

A one-minute silence was observed to pay deep homage and rich tribute to the Father of the Nation, Bangabandhu Sheikh Mujibur Rahman, martyred freedom fighters and three million Bangalees including to the hundreds of thousand women and children who suffered ignominy.

A special prayer was conducted for the salvation of the departed souls of the Father of the Nation and his family members.

Prayer was offered for the and freedom fighters and also for the peace, stability and progress of the country.

Ambassador Mahbub Uz Zaman along with Embassy officials and guests laid down a floral wreath before the portrait of the Father of the Nation Bangabandhu Sheikh Mujibur Rahman. During the inaugural events of the Victory Day, all Embassy diplomats, officials and their spouses including Bangladesh community members were present.

At the outset of the webinar, messages from the President, Prime Minister, Foreign Minister and State Minister for Foreign Affairs were read out.

Ambassador Mahbub Uz Zaman paid deep reverence to the Greatest Bangalee of all time, Father of the Nation Bangabandhu Sheikh Mujibur Rahman for his visionary leadership for the emergence of Bangladesh as an independent country.

He highlighted the significance of the historic day while delineating the role of the government to uphold the spirit of the Liberation War by advancing Bangladesh into a progressive middle-income country by the vision 2021.

The envoy lauded the visionary leadership of the Prime Minister Sheikh Hasina for transforming the Bangladesh economy towards attaining the SDGs and turning Bangladesh into a developed country by the year 2041.