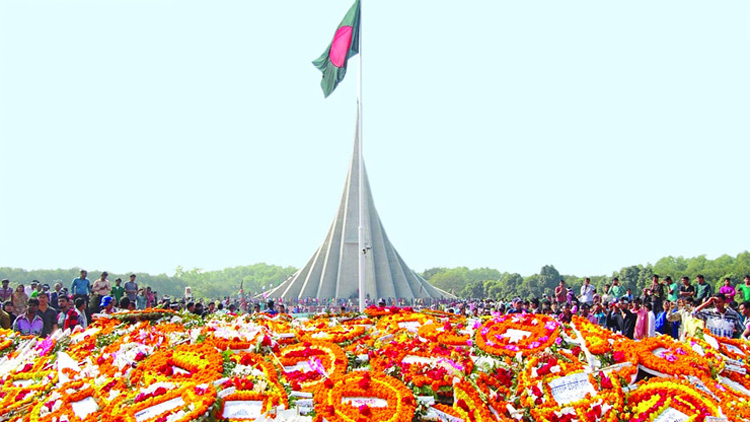 The nation is celebrating the 50th Victory Day today with a renewed pledge to safeguard the independence and sovereignty of the country, strengthen democracy and contain communalism and militancy.

This day in 1971, the Pakistan occupation forces surrendered to the Bangladesh-India allied forces at Suhrawardy Udyan in Dhaka after a nine-month war of independence.

Marking the day, the nation pays profound homage to the brave sons who laid down their lives for the country’s independence.

The celebration of Victory Day has a different dimension this year as the day will be celebrated in the ‘Mujib Barsho,’ the birth centenary of Father of the Nation Bangabandhu Sheikh Mujibur Rahman.

The programmes of the day have been curtailed as there has been a bar to mass gathering amid the coronavirus pandemic. The day’s celebration begins with a 31-gunshot salute at dawn.

On behalf of President Abdul Hamid and Prime Minister Sheikh Hasina, wreaths will be placed at the National Mausoleum at Savar in the morning.

The countrymen will pay rich tribute to Bangabandhu who led from the front to liberate the country from the clutches of West Pakistan.

The celebration has reached new heights following the UNESCO’s recognition of Bangabandhu’s historic 7th March speech as part of the world’s documentary heritage. On October 30, 2017, the UN body made the announcement.

The speech gave inspiration to the Bengali nation in their quest for freedom and boosted freedom fighters for freeing the country through a war.

President Abdul Hamid and Prime Minister Sheikh Hasina have issued separate messages on this occasion, urging the people to work for consolidating sovereignty and independence of the country.

“16th December is our great Victory Day. This day in 1971, we achieved our long-cherished victory after a long struggle. On the eve of the joyous victory day, I extend my sincere felicitations and warm greetings to my countrymen living at home and abroad,” President M Abdul Hamid said in the message.

He also said the seeds of independence that was sown in the Language Movement in 1952 subsequently came into being on 26th March in 1971 through the proclamation of Independence by Father of the Nation Bangabandhu Sheikh Mujibur Rahman, overcoming various ups and downs and staging long movement and agitation.

“Under the undaunted leadership of Bangabandhu Sheikh Mujib, the Bengali nation got prepared for independence through Language Movement of 1948-1952, Education Movement of 1962, Six Point Demand of 1966 and 11-point Movement and Mass Upsurge of 1969,” Prime Minister Sheikh Hasina said in the message.

She said Awami League secured an absolute majority in the general election of 1970. However, Pakistanis prevented the Bengali nation from assuming power. The Father of the Nation realized that the oppression, persecution and deprivation meted out to the Bangalee nation would not be ended without achieving independence.

The day is a public holiday.

The national flag was hoisted at all public and private buildings across the country on the occasion.

Newspapers published special supplements while radios and televisions are airing special programmes highlighting the significance of the day.

Special prayers will be offered at mosques, temples, churches, pagodas and other places of worship, seeking divine blessings for peace and progress of the country.

An improved diet will be served in jails, hospitals, orphanages and vagrant homes across the country.

The main thoroughfares and road islands in the capital have been decorated with miniature national flags. Besides this, important government buildings have also been illuminated.

The ruling Awami League has taken up various programmes to celebrate Victory Day.

The national and the party flags were hoisted at all the offices of Awami League across the country, including the central office on Bangabandhu Avenue.

Other programmes include placing wreaths at the National Mausoleum in the early morning, paying tributes to the portrait of the Father of the Nation at Bangabandhu Bhaban, offering munajat and milad mahfil at the majar of Bangabandhu at Tungipara in Gopalganj.

The party will also hold a discussion at 3:30pm at its central office on Bangabandhu Avenue in the capital.

Prime Minister Sheikh Hasina is expected to address the meeting virtually from her official residence Ganabahban.