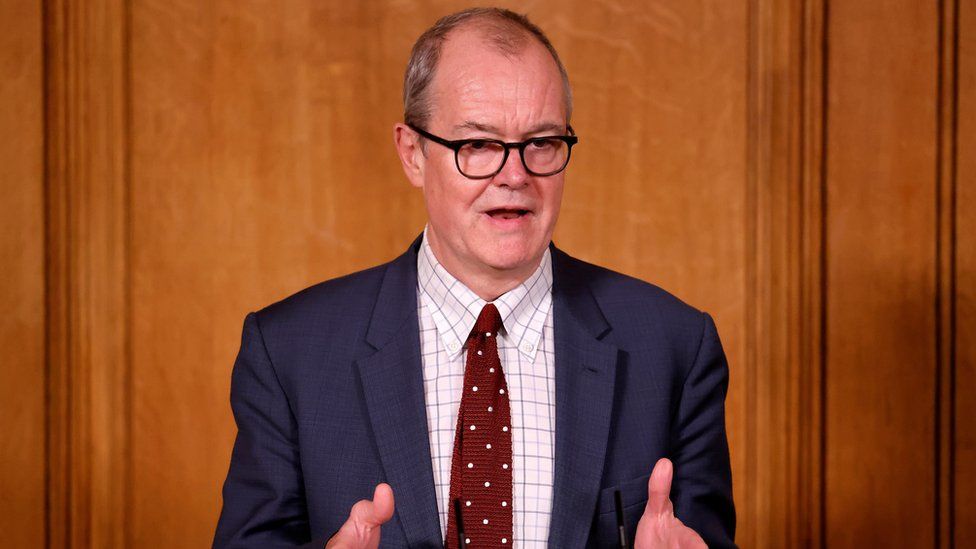 More areas of the country could be placed under severe Covid-19 restrictions, the government’s chief scientific adviser has suggested.

Sir Patrick Vallance explained that due to the new mutant strain of the virus, which is making the virus spread quicker, local health authorities will need to consider imposing more Tier 4 levels of restrictions to help contain it.

“It’s likely that measures will need to be increased in some places in due course and not reduced,” Sir Patrick said during a Downing Street press conference on Monday.
He added: “The doubling time of this infection with a new variant is quite fast, it is more transmissible, it does require more action in order to keep it down and that’s why Tier 4 is important.

“What we did see was that in areas that had lower restrictions, you could still see growth in some places.

“So, it is the case that the measures needed to try to make sure that we reduce contact, we keep the basics in place, make sure that we don’t give the virus a chance to spread, are even more important with the new virus.

“It’s got to be taken incredibly seriously.”

Sir Patrick explained how the new variant of Covid-19 was spreading across the UK and is not just isolated to the south-east of England.

“The new variant is spread around the country,” he said.

“It’s localised in some places but we know there are cases everywhere, so it’s not as though we can stop this getting into other places, there’s some there already.

“The message has been very clear and, I think I want to reinforce it, is stay local.

“I mean, people shouldn’t be travelling around the country at the moment.”

The new variant is no more dangerous than the existing strain but the speed in which it is spreading is a cause for concern.

“Evidence that this can transmit more readily is becoming clear in terms of the data of the rapid spread of this virus across areas,” Sir Patrick said.

“The transmission is increased, but we can’t say exactly by how much, but it is clearly substantially increased, so it is more transmissible, which is why we see it growing so fast and spreading to so many areas.

“There is no evidence that the disease course is any different, so if you catch it the disease looks the same as any other form of Covid infection.

“In terms of the immune response, there is nothing to suggest that this won’t have the same susceptibility to antibody attack from vaccine or pre-existing infection as any other form.

“At the moment, the vaccine looks as though it should be as effective and that’s obviously being looked at.”
There are still blockages at the port in Dover due to France banning travel from the UK, resulting in lorries being backed up on the M20 motorway, although the prime minister hopes to find a swift resolution.

Boris Johnson said: “We are working with our friends across the Channel to unblock the flow of trade as fast as possible.

“And the Government at all levels is communicating with our friends in Paris.

“I have just spoken to President Macron, we had a very good call.

“And we both understand each other’s positions and want to resolve these problems as fast as possible.”
Transport Secretary Grant Shapps told people not to travel to Kent due to the closure of the French border.

He told a Downing Street press conference: “Please don’t travel to Kent. Most people should be staying at home, everybody in Tier 4 must stay home and in Tier 3, stay very local.

“We’re grateful also for the hauliers, the lorry drivers, for steering clear as well.

“That message has been very well understood today and as a result we haven’t seen any problems in the area.

“Most of the lorries who are there, are primarily European hauliers looking to transit back across to the continent.”

Mr Johnson was grilled on “over promising” when it came to coronavirus which has seen him backtrack on a number of matters, including the plans for Christmas which were reneged on.

“You would have to imagine a kind of world in which we’d kept the country in some sort of perpetual lockdown or kept kids out of school for the best part of the year, and I think that would have been really disastrous,” Mr Johnson responded.
“It was very, very important to keep moving forward as far as we possibly could. I think that was the right thing to do.

“And now that we have the vaccine coming in the way that we have, I think we can certainly look forward to a very, very different world for this country from Easter onwards…

“We have every reason to be extremely hopeful about this country’s ability to bounce back next year from Covid, and I think that is the right thing to say then and now.”

It was also confirmed that 500,000 people in the UK have now received their first dose of the Covid-19 vaccine.