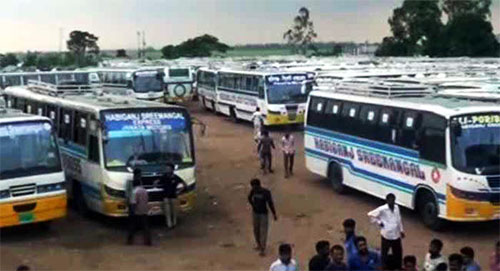 Owners and workers are going on a three-day transport strike from Tuesday demanding the opening of a stone quarry in Sylhet. As a result, all types of public transport and transport of goods will be closed from 6 am on Tuesday to Thursday evening.

Meanwhile, administration officials held a meeting with the striking transport owners and workers in the conference room of the Sylhet deputy commissioner on Monday afternoon.

They did not withdraw from the strike as they did not accept the demands of the transport owners and workers at the meeting. As a result, the strike is starting across Sylhet division on Tuesday at the call of the leaders of public transport and freight owners ‘and workers’ organizations.

Besides, the strike of CNG autorickshaw workers in Sylhet demanding 5 points has started from Monday. Alhaj Golam Hadi, president of the Sylhet District Truck Owners Group, told Chaiful Manabzamin that they were adamant on the strike as no decision had been taken in the meeting with the administration. They will start the strike from Tuesday.

The strike will continue till Thursday evening. He said about 1.5 lakh owners and workers are living a helpless life due to the closure of stone quarries in Sylhet. The economic infrastructure of greater Sylhet has collapsed as all types of business, including transport, have been shut down. In the meantime, memorandums have been issued in various departments and a 48-hour strike has been observed in Sylhet district to open stone quarries.

The quarry is not being opened despite the order of the High Court to open the stone quarry. Therefore, all kinds of transport strikes have been called in Sylhet division. Transport owners and labor leaders said Sylhet Deputy Commissioner Kazi Emdadul Islam and Superintendent of Police Farid Ahmed had called the owners and labor leaders on Monday afternoon to call a strike. At this time the owners and workers put forward their logical demands. At the time, administration officials called for the strike to be called off but did not give any assurance to resolve the crisis.

The leaders appealed to the transport businessmen of all walks of life in Sylhet division to observe the strike. He said transport owners and workers have already held rallies in Sylhet, Sunamganj, Moulvibazar and Habiganj to make the strike a success.