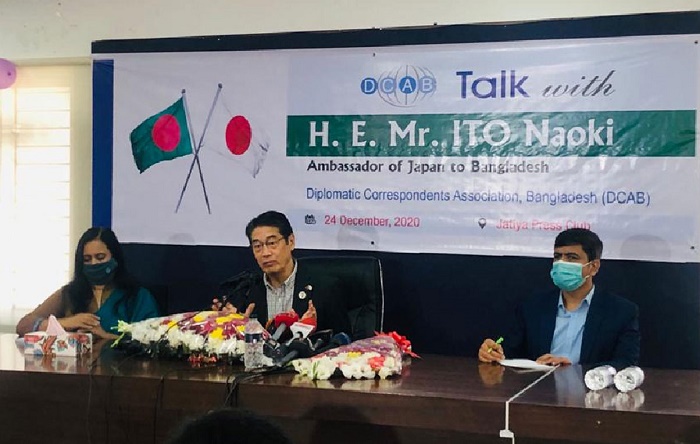 Japanese Ambassador to Bangladesh Ito Naoki said on Thursday that Bangladesh will keep growing beyond Covid-19 and its geographical and strategic location will play more important role in integrating the market and supply chain in Asia and beyond.

The strategic location is very important to attract foreign investment and Japanese investors are now looking for massive investment in newer areas in Bangladesh, he told diplomatic correspondents at DCAB Talk at the Jatiya Press Club in the capital.

“Bangladesh is now perfect destination for investment,” the Japanese envoy said, lauding the government of Prime Minister Sheikh Hasina for creating an atmosphere conducive to investment.

“The government of Bangladesh has done wonderful job in terms of improvement of investment climate.”

Ambassador Naoki said the Prime Minister of Bangladesh addressed almost all the obstacles to Japanese investment, including taxation, customs clearance and some of the specific core issues, which will bring a very positive impact on foreign investment in Bangladesh.

From the next year, he said, it will have impact on the flow of investment. He also hoped that the metro rail is expected to start operation by the end of 2021.

“Japan and Bangladesh are working together towards next 50 years…Toward growth beyond borders,” he added.

Highlighting Bangladesh’s quality infrastructure development, including the metro-rail, expansion of Hazrat Shahjalal International Airport, Padma Bridge, Bangabandhu Railway Bridge over the Jamuna, Japan’s exclusive Economic Zone and Matarbari deep-sea and power projects, he said there will be a complete different picture in Bangladesh in the next three to five years.

“Dream comes true in Bangladesh in maximum 10 years… Moheshkhali-Matarbari Integrated Infrastructure Development Initiative (MIDI) will be a regional industrial hub under the Bay of Bengal Industrial Growth Belt (BIG-B). Future view of the area will look like Singapore,” he said, adding that 10 years are not a big time.

Through introducing quality infrastructure, he said Japan is committed to contributing to the regional connectivity in the context of Free and Open Indo-Pacific and under the initiative of BIG-B as well as to the growth of Bangladesh towards sustainable development goals.

He shared four reasons why Bangladesh matters to Japan including growth potential and geographically strategic location.

In responding to questions, the Japanese ambassador said they want to see the start of repatriation process next year as Japan supports repatriation of Rohingyas to their homes in Rakhine State of Myanmar.

“We should see the start of repatriation process next year and this is very important for lasting solution to the Rohingya crisis,” he said, adding that Japan will continue to help resolve the problem.

The Japanese envoy said they are communicating directly with top military commander and the civilian government in Myanmar on the Rohingya crisis.

He said Myanmar, like Bangladesh, remains a traditional friend of Japan and there is a strong interest in both the countries.