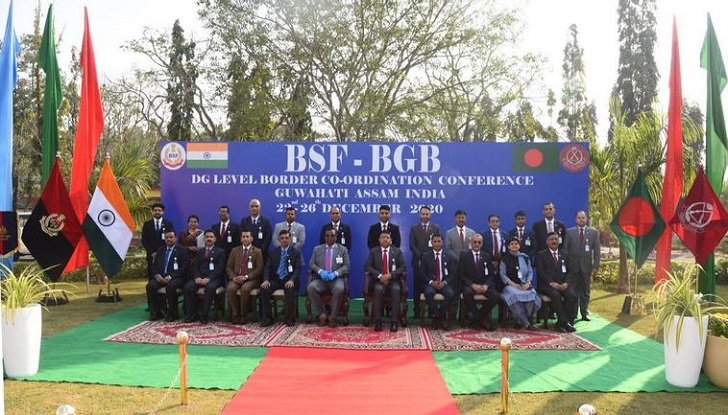 This is the first time that the Director-General Level talks between the two Border Guarding Forces (BGF) was held in Guwahati, Assam of India.

Both DGs expressed their satisfaction over the outcome of the conference. Both the delegation leaders reiterated their commitments to work jointly for maintaining peace and tranquility at the border. Both sides agreed to hold the next DG level conference at Dhaka, Bangladesh preferably within 2nd week of April 2021.

The BSF delegation was led by DG BSF Shri Rakesh Asthana, IPS comprising 12 members including members from Ministry of Home Affairs and Ministry of External Affairs.

DG BSF expressed a warm welcome to the Bangladesh delegation and expressed satisfaction over the excellent cooperation and friendly relations between the two border guarding forces and hoped that the cooperation will continue to grow in future.

Expressing satisfaction over the coordinated efforts of BGB and BSF in maintaining peace and tranquility along the border, DG BGB stressed the need for effective implementation of Coordinated Border Management Plan (CBMP).

The summary of the decisions taken after thorough discussion on the agenda points during the conference are appended below:

DG BGB expressed his grave concern over the killing/injuring/beating of unarmed Bangladeshi Nationals by BSF/Indian Nationals/miscreants in the bordering areas. He stated that people of Bangladesh always appreciate the existing excellent relationship between the two border guarding forces and expect that BGB and BSF will take necessary measures to bring down the death cases to zero. He further urged to uphold the human rights and make all out efforts to apprehend the criminals and bring them under the law of the land instead of killing them. DG BSF assured that the death incidents in the border will be made to reduce significantly in near future.

Reiterating the need for joint efforts to uphold human rights and curb violence on the border, both sides agreed to conduct joint night patrols in vulnerable areas of the border as a more effective initiative to reduce border killings to zero.

Highlighting the importance of Coordinated Border Management Plan(CBMP) in curbing the menace of trans-border crimes DG BGB expressed his concern over the smuggling of various types of drugs and narcotics specially yaba, fire arms, contraband items, smuggling of cattle/FCN/Gold etc and sought cooperation of BSF to prevent these menace.

DG BSF expressed that illicit drug trafficking and the consequent drug addiction amongst the youth population on both sides is a real danger that needs to be tackled effectively. Both sides agreed to pursue and share real time information, interrogation reports of traffickers and need based joint operations which will be beneficial for both the border guarding forces.

DG BGB expressed his concern that Indian Nationals and BSF personnel are often entering inside Bangladesh violating the existing norms/rules which may entail misunderstanding and unpleasant situation between the two friendly border guarding forces. He sought cooperation of BSF to uphold the existing friendly relationship of both the border guarding forces. Both sides agreed to continue to sensitize the border populace to refrain from illegal crossing/violations and at the same time assured maintenance of the sanctity of the border by the members of both forces.

Recalling the bi-lateral joint statement on 17th December2020 between both the countries where Hon’ble Prime Minister of India assured to consider the request for 1.3 km Innocent Passage through river route along River Padma near Rajshahi District. DG BGB requested DG BSF to pursue the case with highest priority. DG BSF assured to pursue the case with concerned authority.

DG BGB voiced his concern over the presence of few Bangladeshi Armed Miscreants camps of Regional Parties of Chattogram Hill Tracts in Mizoram State of India and requested for destruction of those camps. Stating the ‘Zero Tolerance Policy’ of the Govt. of India towards terrorism, DG BSF assured to take appropriate action against those camps, if found.