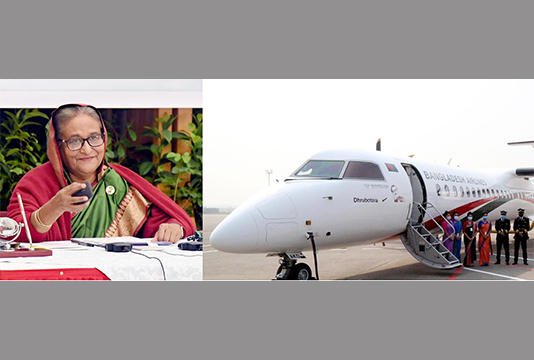 National flag carrier Biman Bangladesh Airlines got a new Dash 8-400 aircraft to help it expand operations in the short-range, including domestic and South Asian destinations.

Biman procured three Dash 8-400 aircraft under the G2G (government-to-government) agreement between Bangladesh and Canada. The first one has been inducted today while two others will be included in a couple of months.

The opening function of the new aircraft was held at the VVIP terminal of Hazrat Shahjalal International Airport where State Minister for Civil Aviation and Tourism M Mahbub Ali was present with other Biman officials.

Prime Minister Hasina has named the new aircraft like the other new planes which have already been added to Biman’s fleet.

Earlier, the national flag carrier received the first Dash 8-400 aircraft out of three made by De Havilland Aircraft of Canada.

According to a Biman press release, the Dash 8-400 aircraft equipped with eco-friendly and state-of-the-art facilities arrived on November 24.

Prime Minister Hasina said Bangladesh’s geological position will help it earn huge profits if it can establish communication with other countries around it.

“Steps have been taken to strengthen regional and international connectivity through Biman to further expand trade and commerce,” she said.

She mentioned that Bangladesh wants to further strengthen and expand trade relations with countries particularly in South and South-East Asia.

In this connection, Sheikh Hasina said that induction of new aircraft along with the old ones will help establish well-organised communication with the neighbouring countries.

And strengthening of the capacity of Biman fleet is a part of the move, she said adding that two more Dash 8 Q-400 aircraft would be added to the national flag carrier in February next.

Sheikh Hasina said the government has been making Biman more capable with modern facilities as Bangladesh is first known in the International arena through the National Flag Carrier.

But she regretted that the expanded fleet of Biman remains idle due to the COVID-19 pandemic which grounded flights.

“This is the problem for the whole world,” she said. “The whole world is in the same condition and in a position of standstill.”

Three Dash 8-400 aircraft were ordered under a purchase agreement signed between the national flag carrier Biman and the Canadian De Havilland in 2018.