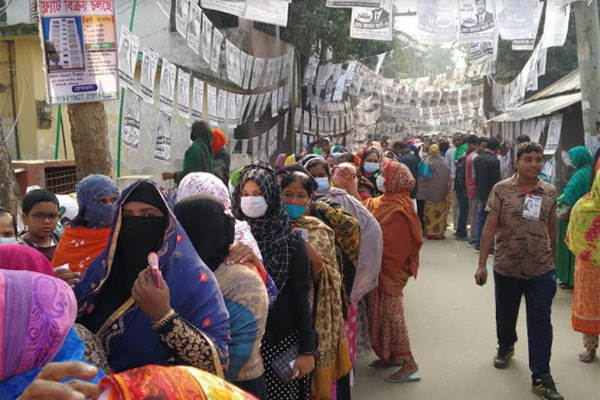 The voting in the first phase elections to 24 municipalities began on Monday morning amid the prevailing coronavirus situation in the country.

Electronic Voting Machines (EVM) are being used in the elections which started at 8:00am and will continue till 4:00pm without any break.

Executive and judicial magistrates along with the members of different law enforcement agencies, including BGB, RAB, police and Ansar, are monitoring the elections.Candidates from Awami League, BNP, Jatiya Party, Islami Andolan Bangladesh and Jatiya Ganatantrik Party are vying for the posts of mayor in the municipal areas.

Independent candidates are also taking part in the election.

More than 1,000 candidates are contesting for the posts of mayor and councillor in the first phase elections.

Although the pre-poll environment has been peaceful, clashes were reported in a few areas.

According to the latest schedule, the third phase elections will be held on Jan 30 in 64 municipalities. Municipalities, which will be eligible for polls by February, will witness a fourth round of voting.There are a total of 329 municipalities in the country. The law requires the local government body to conduct polls within 90 days before the end of a term.