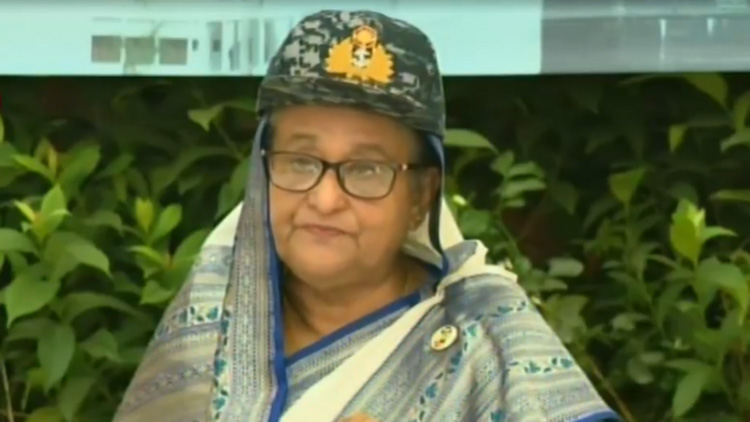 Prime Minister Sheikh Hasina on Wednesday said the government is building up every force in such a way so that the country could avail all sorts of measures and training to protect its independence and sovereignty.

“We want peace, not war. But for protecting our country’s independence and sovereignty we have to take all measures and training [and] we’re building up all our forces that way,” she said while addressing the President’s Parade-2020, held at Bangladesh Naval Academy, Chattogram.

She attended the event virtually from her official residence Ganobhaban.

She said that as an independent country, the government aims to ensure that the people of the country will roam in the world arena with their heads ever high.

“We’ll take all preparations for protecting the independence and sovereignty [of our country]. But war with no one, friendship to all and malice to none, that is our policy,” she said.

In this connection, Sheikh Hasina said that the government had transferred Khulna Shipyard and dry dockyards in Chattogram and Narayanganj to the Navy.

“Our aim was to build warships from our own shipyards. We’ve already started some of our activities for that,” she said, adding that a submarine base is being constructed at Pekua in Cox’s Bazar while expansion works are going on for Rabanabad Naval Base.

Briefly describing various development activities of Bangladesh Navy, the Prime Minister said that the government has turned Navy into a three-dimensional force following the Forces Goal 2030.

She said that the government has inducted 27 warships, created skilled naval commando and rescue team and aviation team, inducted two submarines in 2017 and constructed Bangabandhu Complex in the Naval Academy with modern facilities for providing better training.

Talking about the vast marine boundary, the Prime Minister said that the government is working to utilise the marine resources for the economic development of the country.

“We’ll be [walking] in the world arena with our heads high. We want to build the country like that way and we’re working towards that direction,” she said.

Regarding the coronavirus, she asked all to follow health guidelines so that the virus cannot spread.

Chief of Naval Staff Admiral M Shaheen Iqbal, on behalf of the Prime Minister, distributed different awards among the cadets for their outstanding results.