Covid: 44 million in England under toughest Tier 4 rules from Thursday 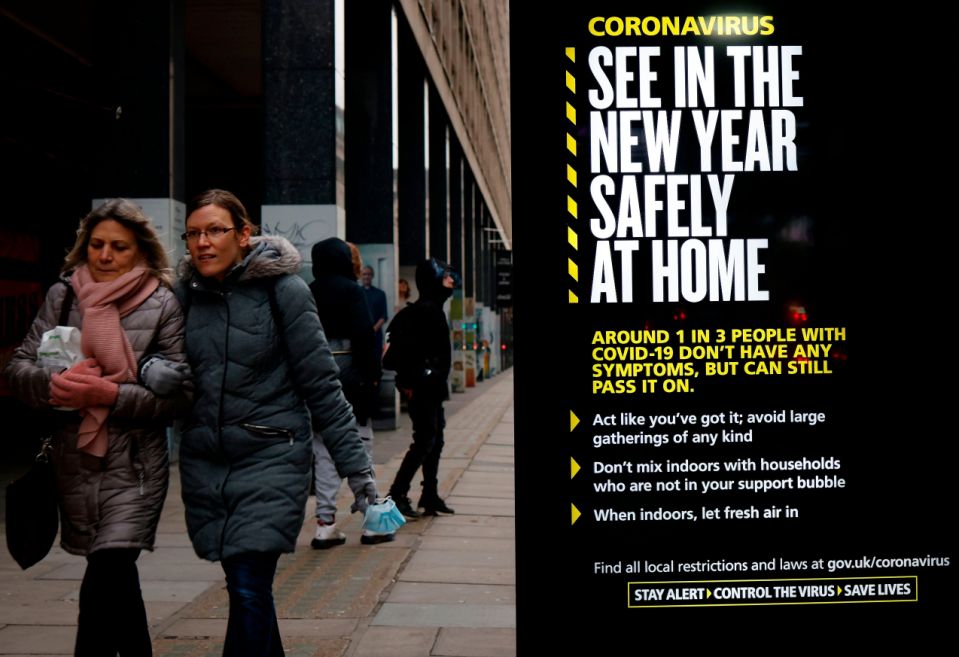 A total of 44 million people will be under Tier 4 Covid restrictions on Thursday as the government extends the toughest rules to cover more areas in England.

More of the Midlands, the North East, parts of the North West and South West of England will enter the highest coronavirus measures on New Year’s Eve, Matt Hancock has announced.

This means three quarters of England will now be in Tier 4, or 78% of the population of England, from December 31.
Addressing MPs in the Commons, the health secretary said: “The NHS is under very significant pressure… and we can see the impact this is happening, the threat to life is real.”

He added: “The new variant means that three quarters of the population are now going to be in Tier 4 and almost all of the country in Tiers 3 and 4.”

Areas which will be covered by the Tier 4 rules from tomorrow are:

Areas which will be covered by the Tier 3 rules from tomorrow are:

The latest tiers announcement comes on the same day the Oxford/AstraZeneca coronavirus vaccine has been approved for use in the UK.

Mr Hancock also said the UK has 530,000 doses of the Oxford/AstraZeneca vaccine available from Monday.

Shadow health secretary Jon Ashworth said Labour would support the tougher regulations when put to a vote in the Commons on Wednesday.

He told the Commons: “Almost the whole of England is now in a form of lockdown and for my constituents in Leicester, and I’m sure the constituents of MPs from Greater Manchester, will be deeply worried that our areas have now been in a form of restriction for months and months and months. It’s having a huge impact on families and small businesses.”

Mr Ashworth questioned if mass lateral flow testing is not enough to contain the spread of coronavirus given Liverpool will move up a tier, before adding: “We will vote for the regulations tonight because the situation we’re in is truly horrific.”

He added the virus is “out of control”, asked for assurances over oxygen supplies for hospitals, and said frontline NHS staff need the “protection of the vaccine ASAP”.

Jeremy Hunt, Conservative chairman of the Commons Health and Social Care Select Committee, said: “The NHS now is busier than it was last April, in parts of London it looks like it may fall over.”

Mr Hunt said: “But back in April schools were shut, next week primary schools are due to reopen.

“In September we came to regret allowing university students to go back en masse but some universities are going to start to go back from next week.

“Why in the middle of winter when the NHS is under such pressure, when we have a dangerous new strain of the virus are we taking such huge risks?

“Shouldn’t our entire focus for the entire eight to 12 weeks be on saving lives?”

Shortly after the Health Secretary’s appearance in the Commons, the Education Secretary announced the planned return to schools would be delayed in England.

All pupils in exam years will now return to secondary schools from January 11 while the rest of secondary and college students will go back full-time on January 18.

The announcement comes at a time when the second, more transmissable variant of Covid-19 is sweeping across the country – with 53,000 new cases reported on Tuesday alone.

Experts believe the new strain is 70% more infectious than the one previously being dealt with.

The outbreak has caused countries around the world to close their borders to the UK.

Health chiefs in Cumbria have said the new variant is already in the county and could be behind sharp increases in new cases.

What are the main rules if I’m in a Tier 4 area?

People must stay at home, similar to the March and November lockdowns, except for where you have a specific purpose, or a “reasonable excuse”, such as buying food or medicine, or to collect any items from a click-and-collect service.

People in Tier 4 must stay in their area, except for work, education or visiting a support or childcare bubble. Residents in Tier 4 must not stay overnight away from home.

All non-essential shops, hairdressers, sports facilities and leisure and entertainment venues must close.

You can leave home to visit people in your support bubble, or to provide childcare for children aged 13 and under as part of a childcare bubble.

You can meet one other person from another household in a public, outdoor space.

2020-12-30
Mr. Admin
Previous: Bangladesh to get vaccines thru’ India’s Serum Institute in January
Next: UK coronavirus deaths increase by 981, with another 50,023 cases