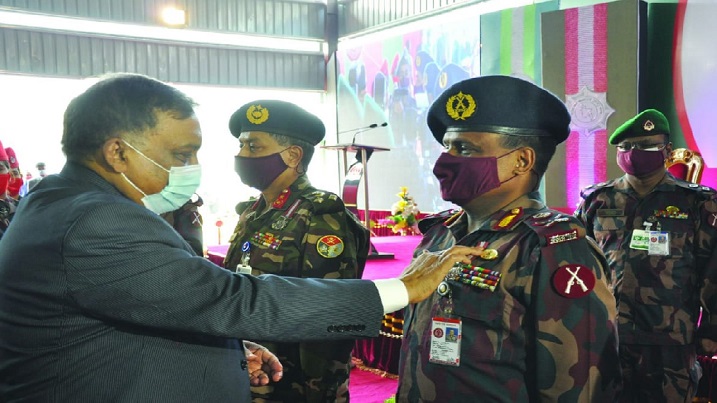 Home Minister Asaduzzaman Khan on Wednesday hopes that steps taken for the welfare of the Border Guard Bangladesh (BGB) members give more impetus for its operational activities and help it achieve greater success.

“A number of steps have been taken for the welfare of BGB members at all levels that will give the force more impetus for its operations and enable it to achieve greater success,” he said while addressing a function at Pilkhana BGB headquarters.

Asaduzzaman distributed awards among recipients in recognition of their heroic work in the activities of the BGB in 2020.

The BGB is tasked with protecting the country’s borders.

Despite various limitations, the BGB’s success in curbing smuggling, drug trafficking and trafficking of women and children, and border security are commendable, he said.

The Home Minister said, in particular, the BGB has been able to show special achievements in preventing the smuggling of yaba, phensedyl and other drugs. The force is also playing an admirable role in building the country, including maintaining law and order.

Asaduzzaman said that the government has been working sincerely for the overall welfare of the BGB and for building it as a modern border force.

Work is underway to augment the BGB’s organizational structure and increase its state-of-the-art equipment and manpower. The BGB has already been declared a three-dimensional force with the inauguration of the BGB Air Wing and the addition of two state-of-the-art helicopters, he added.

BGB Director General Major General Md Shafeenul Islam asserted that the capacity and enthusiasm of the members of BGB has greatly increased due to the facilities provided by the incumbent government and today their morale is much better than at any time in the past.

This contribution will be remembered by all the members of BGB and their families with lifelong respect, he said, expressing hope that the kind initiative and generosity of the government would continue in the overall development of Border Guard Bangladesh in the days to come.

He extended heartfelt congratulations and best wishes to all BGB members who were awarded the medal in recognition of their heroic work in 2020.