Don't Miss
Home / Entertainment / The cultural personalities we lost in ‘20

The cultural personalities we lost in ‘20 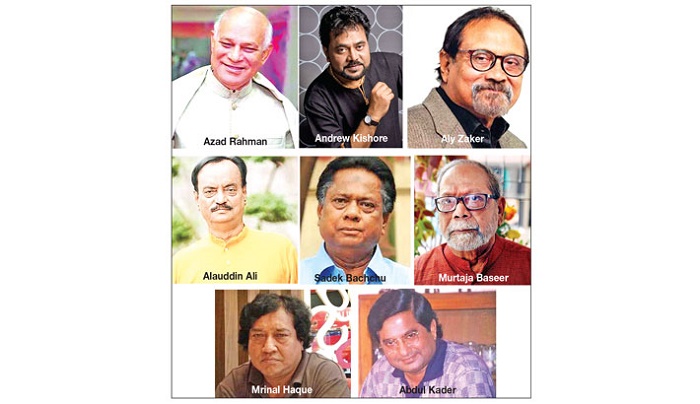 The entertainment industry of the country has lost a good many cultural personalities in 2020, including, noted actors Aly Zaker, Adbul Kader, Sadek Bachchu, singer Andrew Kishore, music composers Azad Rahman and Alauddin Ali. The demise of the artistes left a vacuum in the entertainment industry. Here is a look back at the stars who passed away in the year.

Azad Rahman: Prominent music composer of the country Azad Rahman died on May 16. He won Bangladesh National Film Award for Best Music Director twice and Best Male Playback Singer once for his performance in the films ‘Jadur Bashi’ (1977) and ‘Chandabaz’ (1993).  He also received a gold medal in 2011 from Rabindra Bharati University in Kolkata.

Alauddin Ali: Alauddin Ali was a prominent music composer of the country. He has composed many songs and directed music for more than 300 films. The legendary music director won the Bangladesh National Film Award for Best Music Director five times for the films ‘Golapi Ekhon Traine’ (1978), ‘Sundori’ (1979), ‘Koshai’ (1980), ‘Jogajog’ (1988) and ‘Lakhe Ekta’ (1990). He won the Best Music Composer award for the film ‘Laal Doriya’ (2002) and the ‘Best Lyrics’ award for Premik (1985). Alauddin Ali breathed his last on August 9.

Murtaja Baseer: Painter and artist Murtaja Baseer, who was known for his abstract realism themed works, died on August 15. He was also a poet, author, researcher, numismatist, and filmmaker. He was awarded the Ekushey Padak in 1980 and Independence Day Award in 2019.

Mrinal Haque: The noted sculptor of the country died on August 22. Some of his popular works include, ‘Rajoshik’, ‘Protyasha’, ‘Janani O Gorbito Bornomala’, ‘Ratnadip’ (Island of Pearls) in front of the Prime Minister’s Office, ‘Kotoyal’ in Eskaton, ‘Balaka’ in Motijheel, ‘Ispater Kanna’ at Dhanmondi-27 (Mirpur Road Junction)  and ‘Golden Jubilee Tower’ at Rajshahi University.

Aly Zaker: Popular actor Aly Zaker passed away on November 27. Aly Zaker was famed for his theatre acting, with his career spanning many decades. He was founding member of the theatre group, Nagorik where he worked alongside his wife Sara Zaker and the celebrated actor and politician Asaduzzaman Noor since the 1970s. He was awarded the prestigious Ekushey Padak award in 1999.

Mannan Hira: Mannan Hira was a popular dramatist and filmmaker of the country. He was the recipient of 2006 Bangla Academy Literary Award.  His notable dramas are ‘Laal Jamin’, ‘Bhager Manush’, ‘Moyur Singhasan’, ‘Sada-Kalo’ ‘Murkha Loker Murkha Kotha’ and ‘Ekatturer Khudiram’. The noted thespian died on December 23.

As a comedic actor, Kader had regularly been active in television since the 90s’ and also had been a regular cast as ‘Mama’ on the ‘Mama-Vagne’ segment alongside actor Afzal Sharif on Hanif Sanket’s ‘Ityadi’.

On the other hand, Tollywood has lost legendary Bengali actors Soumitra Chatterjee and Tapas Pal.

2021-01-01
Mr. Admin
Previous: AL hopes turn of positive politics in New Year
Next: Painful 2020 ends for US workers and layoffs could rise again