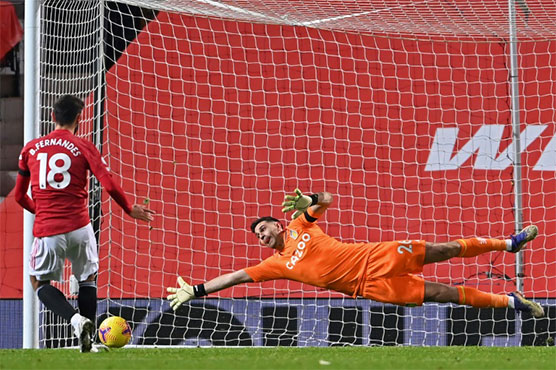 Manchester United moved level on points with Liverpool at the top of the Premier League as Bruno Fernandes’s penalty saw off Aston Villa 2-1 in an entertaining clash at Old Trafford.

Anthony Martial’s header five minutes before the break was just reward for a bright start by Ole Gunnar Solskjaer’s men, but they were pegged back by Bertrand Traore’s equaliser just before the hour mark.

Just three minutes later, though, United’s talisman Fernandes won the game from the spot after Paul Pogba had been upended inside the area.

Another season just contending for a top-four finish looked in store for United after winning just two of their opening six league games.

But as all the other contenders have stumbled in recent weeks, the Red Devils have now taken 26 from a possible 30 points to mount an unexpected title challenge.

Solskjaer’s side needed a 93rd minute winner to beat Wolves on Tuesday, but were far faster out the blocks this time round.

Martial forced Emiliano Martinez into an excellent save high to his left inside 10 minutes before Fred, Pogba and Fernandes fired efforts just off target.

The breakthrough came five minutes before the break and owed much to Pogba’s ingenuity with the Frenchman finally starting to find form despite the speculation over his future.

Pogba and Marcus Rashford combined to send Aaron Wan-Bissaka free down the right and his cross was headed home by Martial at the near post.

Villa were on a five-game unbeaten run themselves to earn a place in the top six and showed why with their start to the second-half as United were forced back.

Jack Grealish was again at the heart of all the visitors’ best work going forward and it was from his cross that Ollie Watkins’s header produced a fine reflex save from David De Gea.

From Grealish’s next dangerous delivery, Villa deservedly equalised as this time Traore took a touch and slotted low past De Gea.

However, Dean Smith’s men quickly undid their good work as a soft challenge from Douglas Luiz on Pogba was deemed enough for a penalty by referee Michael Oliver.

Fernandes’s near-perfect penalty record continued as he slotted the spot-kick just out of the reach of Martinez for his 15th goal of the season.

Pogba should have rounded off a promising performance by sealing the points when he side-footed just wide when unmarked inside the area before more Martinez heroics denied Fernandes a double as he turned the Portuguese’s fierce effort onto the crossbar.

And United needed a big save from their own goalkeeper in stoppage time to hang on as De Gea sprang to his right to turn Matty Cash’s long-range effort behind.

Earlier, Everton missed the chance to close to within a point of the top two as they were beaten 1-0 at home by West Ham.

The Toffees failed to exert themselves on a West Ham side playing their third game in six days and were punished when Tomas Soucek slotted home the winner four minutes from time.

“It was not a good game,” said Everton boss Carlo Ancelotti.

“We didn’t have opportunities and we didn’t concede opportunities, they had a lucky deflection and we lost the game. We could play with more intensity and more quality up front.”

David Moyes’s men had the toughest festive fixture schedule in the Premier League in terms of rest and he said there has been a change in mindset with the Hammers this season to battle through adversity.

“The players have played three games in six games, they are amazing,” said Moyes, who won for the first time as a visiting manager at Goodison Park, where he made his name in 11 years in charge of Everton.

“I don’t think there was any difference in the fitness levels so great credit to the players, there has been a big change in the mentality here at West Ham.”

Victory took West Ham to within three points of third, although they remain in 10th in a tight Premier League table.