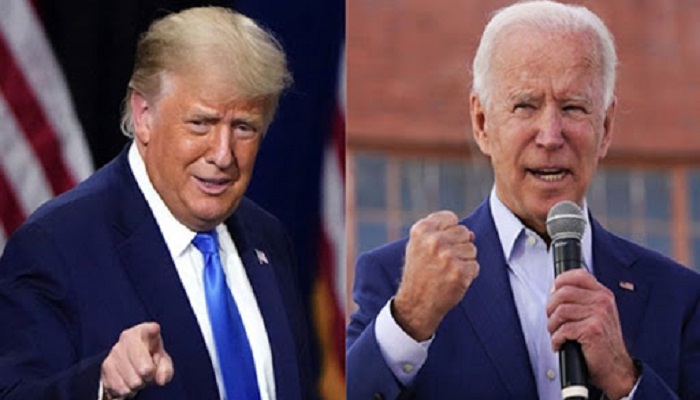 Donald Trump, still scheming to reverse his election defeat and lashing out at Republicans opposing his efforts, converged with President-elect Joe Biden in Georgia on Monday for dueling rallies on the eve of two runoffs that will decide control of the US Senate.

Trump, a day after the release of a bombshell recording in which he pressures Georgia officials to overturn his election loss in the southern state, hosts a rally in the rural city of Dalton for Republican incumbent senators Kelly Loeffler and David Perdue.

The president’s presence is provocative in that he has described Georgia’s election process as “illegal and invalid,” criticism that some observers warn may have the unintended effect of suppressing Republican votes Tuesday.

Biden, who takes over the White House on January 20, flew to Georgia’s capital Atlanta to campaign for Democratic challengers Raphael Warnock and Jon Ossoff.

“Folks, this is it!” the 78-year-old Biden told cheering voters at a drive-in rally. “It’s a new year, and tomorrow can be a new day for Atlanta, for Georgia and for America.”

He attacked Trump for his relentless “whining and complaining” about unproven election fraud instead of improving the nation’s coronavirus pandemic response.

“I don’t know why he still wants the job, he doesn’t want to do the work,” Biden said.

Georgia has been reliably Republican but Biden beat Trump by nearly 12,000 votes in the Peach State in November’s election, and polls have the Senate races neck-and-neck.

Both parties have poured unprecedented resources into the runoffs, and early voting numbers have set records.

Republicans hold 50 seats in the 100-member Senate. A victory in just one of the runoffs would give them a majority — and the ability to thwart Biden’s agenda.

A Democratic sweep would result in a 50-50 split, with Democrats holding the tie-breaking vote in incoming Vice President Kamala Harris.

Loeffler, 50, a wealthy executive appointed to the Senate in 2019, faces Warnock, a 51-year-old Black pastor at the Atlanta church where Martin Luther King Jr once preached.

Perdue, 71, a former chief executive of Dollar General who was elected in 2014, is running against Ossoff, the 33-year-old head of a television production company.

Loeffler will likely attend Trump’s rally while Perdue, who is in quarantine after contact with someone who tested positive for Covid-19, is expected to dial in virtually.

Trump supporters began gathering hours before the start of his rally, where stands sold “Stop the Steal” signs.

The Georgia rallies come a day after The Washington Post published the shocking recording of a telephone call between Trump and Georgia Secretary of State Brad Raffensperger.

On the tape, Trump tells Raffensperger he wants to “find 11,780 votes” — one more than Biden’s margin of victory in Georgia — and makes vague threats that Raffensperger, could face “a big risk” if he fails to do so.

Trump repeatedly and falsely claims during the hour-long conversation that he won Georgia, an assertion refuted in recounts and in the courts.

Raffensperger, a fellow Republican, rebuffs Trump’s claims, telling him: “the data you have is wrong.”

Surprisingly, Biden made no mention of the explosive recording Monday.

But House Democrats Ted Lieu and Kathleen Rice asked the FBI to open an investigation of Trump, saying he had engaged in “a number of election crimes” in his call.

“The evidence of election fraud by Mr. Trump is now in broad daylight,” they said.

Georgia’s runoffs are being held the day before Congress certifies the Electoral College votes that determine the White House winner.

Certification is usually a formality but dozens of House Republicans and 12 Senate Republicans have signaled they will raise objections.

At least one House and one Senate member needs to lodge an objection to certification to send it to the two chambers for debate and votes.

The votes would be doomed to failure, however, in the Democratic-controlled House and the Republican-majority Senate, where a number of Republican senators have said they will not contest Biden’s victory.

Trump savaged Republicans who have refused to endorse his baseless claims.

“How can you certify an election when the numbers being certified are verifiably WRONG,” he tweeted Monday, blasting the Republican Party as “the ‘Surrender Caucus.’”

“These are all easily provably false, yet the president persists, and by doing so undermines Georgians’ faith in the election system,” official Gabriel Sterling said.