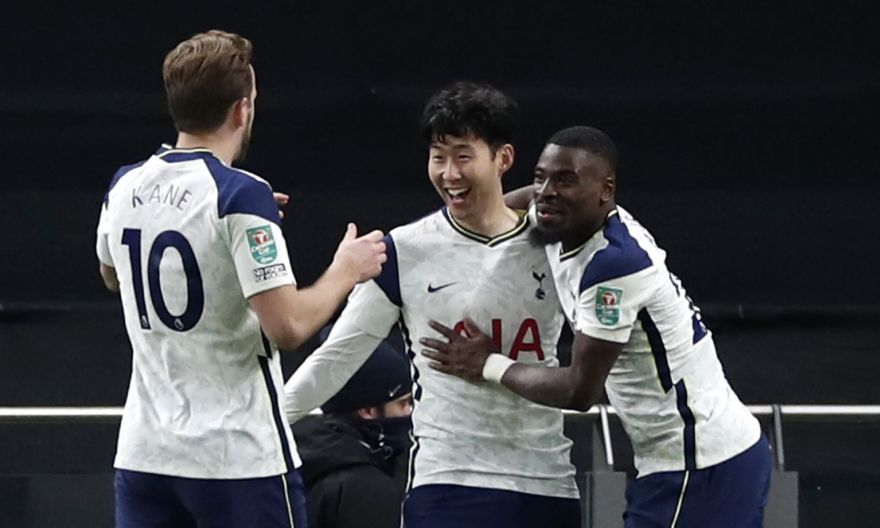 Jose Mourinho urged Tottenham to kick on after Son Heung-min fired them into the League Cup final with the decisive goal in a 2-0 win against Brentford on Tuesday.

Moussa Sissoko put Mourinho’s team ahead in the semi-final at the Tottenham Hotspur Stadium.

But Tottenham were still searching for the knockout blow against spirited second tier Brentford until Son netted with 20 minutes remaining.

Tottenham will face Manchester United or holders Manchester City, who meet in the second semi-final on Wednesday, at Wembley on April 25.

It will be the club’s first domestic final since losing the 2015 League Cup showpiece against Chelsea, and their first final in any competition since the 2019 Champions League defeat against Liverpool in Madrid.

“The final is now in a pocket for three months, we have to wait for the final so we have to focus on what we have coming up,” Mourinho said.

“We have the FA Cup, the Premier League, the Europa league, so let’s forget the final for now. But when April arrives we have to be ready and to fight for the trophy.”

Mourinho, appointed in November 2019, is hoping to lead Tottenham to their first major trophy since the 2008 League Cup.

He has already won the competition four times, landing his first silverware in English football in 2005 with Chelsea, where he won it twice more before a further success at Manchester United in 2017.

“This is a game that takes us to a final. Of course we are very, very happy with this,” Mourinho said.

“We didn’t play brilliantly, sometimes wrong decisions, sometimes one more touch, not with that soft control that allows you to play fast but the game is always under control against a team that will probably be in the Premier League next year.”

The Tottenham boss had labelled Brentford’s visit to north London as the biggest game of his reign, so it was no surprise he picked Son and Harry Kane in a team featuring five changes from Saturday’s Premier League win over Leeds.

But Tottenham needed just 12 minutes to take the lead as Sergio Reguilon’s pin-point cross from the left evaded Brentford defender Ethan Pinnock and found Sissoko, who finished his burst into the six-yard box with a powerful header into the top corner.

It was the French midfielder’s first goal since December 2019, ending a barren run that had stretched to 36 matches.

Tottenham pressed hard for a second goal and Son’s long-range drive forced a good save from David Raya, who had to stretch to tip away Lucas Moura’s deflected header just before half-time.

Son flashed a volley just wide from Sissoko’s cross, but Tottenham escaped in the 63rd minute when Ivan Toney’s equaliser was disallowed by VAR.

When Pinnock’s header was clawed away by Hugo Lloris, Toney stabbed in the rebound from close-range, only for the Brentford striker’s celebrations to be curtailed when his knee was seen to be in an offside position.

That tight decision proved the crucial moment as Son struck in the 70th minute.

Kane fed Tanguy Ndombele and the midfielder’s defence-splitting pass teed up Son, who fired high into the roof of the net for his 16th goal of the season.

Brentford’s Josh Dasilva was sent off in the 84th minute for a studs-up foul on Pierre-Emile Hojbjerg that left the furious Tottenham midfielder with blood running down his shin.

2021-01-06
Mr. Admin
Previous: Covid: Daily coronavirus cases hit new high of 60,000 for the first time since beginning of pandemic
Next: WHO advisers back spaced-out Covid jabs