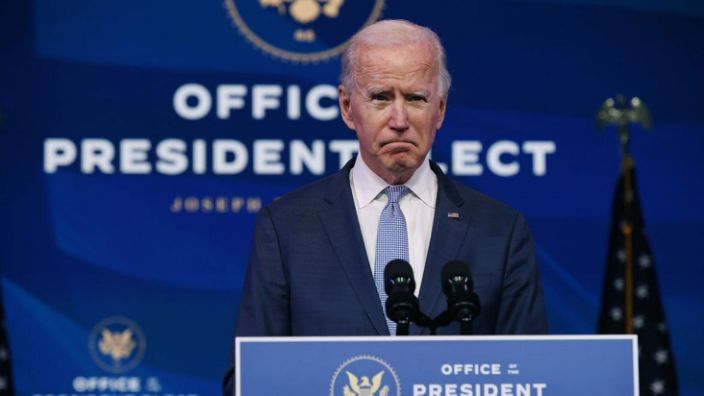 US President-elect Joe Biden has blasted the “insurrection” of pro-Trump supporters who stormed the US Congress in a riot that saw a woman shot dead.

The Democrat demanded outgoing President Donald Trump “step up” and repudiate the violence.

Mr Trump, who had urged the demonstrators to march on the Capitol, later called on them to “go home”.

A joint session of Congress confirming Mr Biden’s election win has resumed after it was suspended by the mayhem.

US Vice-President Mike Pence started the session on Wednesday evening, saying it had been a “dark day in the history of the United States Capitol”.

Earlier, the protesters fought their way past police into the complex, shouting and waving Trump and US flags as they roamed the halls, demanding the results of the presidential election be overturned.

In stunning scenes beamed around the world, the invasion sent members of Congress scrambling for cover under their seats as a gunshot rang out and tear gas was fired in the Capitol Rotunda.

A female civilian who was shot inside the US Capitol during the chaos has died, a spokesperson for the Metropolitan Police Department said.

Federal law enforcement official said two suspected explosive devices were found and were both rendered safe by the FBI and Capitol Hill police.

The rampage came as two Democrats won Senate seats in elections in Georgia, which shifted the balance of Congress to their party’s effective political control, aiding the passage of Mr Biden’s agenda after he is inaugurated on 20 January.

2021-01-07
Mr. Admin
Previous: Amazon pledges billions for affordable homes in US
Next: World leaders condemn ‘assault on democracy’ at US Capitol