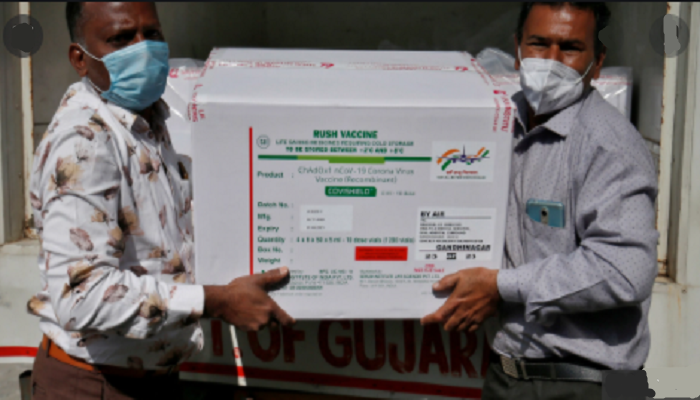 India considers Bangladesh as a priority country among its neighbours to receive Covid-19 vaccine, a government official said on Thursday as India is set to launch its world’s largest massive vaccination drive tomorrow.

“In line with India’s First Neighbourhood Policy-2021, the neighbouring countries will receive India’s vaccines on priority basis among the neighbourhoods, Bangladesh will certainly get first priority to this end,” he added.

When asked about specific date of exporting India’s vaccines to Bangladesh, the official familiar with the developments and preferring not to be named avoided giving a direct reply saying, “Bangladesh will get the vaccine soon as it is a priority country for India”.

As similar question was asked to MEA’s official spokesperson Anurag Srivastava during the virtual media briefing on Thursday, he said, “It is too early to give a specific response on the supply of vaccines to other countries as the vaccination process has just started in India”.

He said, “India is still assessing production schedules and availability (of vaccines) to take decision in this regard”.

In this connection, he referred to Prime Minister Narendra Modi’s recent speech on India’s vaccine cooperation as Modi said, “India’s vaccine production and delivery capacity would be used for the benefit of all humanity in fighting this crisis”.

Besides, India’s Foreign Secretary Harsh Vardhan Shringla while making comments on export of Indian vaccines told media recently that Bangladesh had nothing to be worried as India would provide the COVID-19 vaccine to Bangladesh on a priority basis.

He added that Bangladesh, as a priority country to India, will receive the vaccine produced in the country from the “very beginning”.

Drug Controller General of India (DCGI) on January 3 approved two coronavirus vaccines- “Covishield and Covaxin”- for their “restricted emergency use”.

Covishield is jointly developed by Oxford University and AstraZeneca and manufactured by Serum Institute of India (SII) and “Covaxin” by Bharat Biotech Ltd.

However, India is set to launch the world’s largest vaccination drive against Covid-19 tomorrow with a record 300,000 health care workers across the country scheduled to get vaccinated on the first day.

2021-01-15
Mr. Admin
Previous: Bangladesh schools to remain shut until Jan 30 amid pandemic
Next: Holy Relics must be sought to immediate  protection.  Turkey  matter