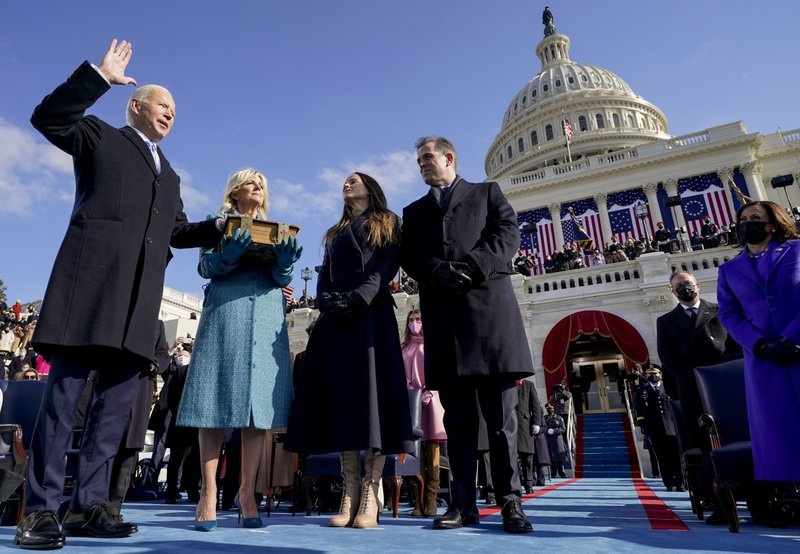 Joe Biden became the 46th president of the United States on Wednesday, declaring that “democracy has prevailed” as he took the helm of a deeply divided nation and inherited a confluence of crises arguably greater than any faced by his predecessors.
Biden’s inauguration came at a time of national tumult and uncertainty, a ceremony of resilience as the hallowed American democratic rite unfurled at a U.S. Capitol battered by an insurrectionist siege just two weeks ago. The chilly Washington morning was dotted with snow flurries, but the sun emerged just before Biden took the oath of office, the quadrennial ceremony persevering even though it was encircled by security forces evocative of a war zone and devoid of crowds because of the coronavirus pandemic.
“The will of the people has been heard, and the will of the people has been heeded. We’ve learned again that democracy is precious and democracy is fragile. At this hour, my friends, democracy has prevailed,” Biden said. “This is America’s day. This is democracy’s day. A day in history and hope, of renewal and resolve.”
And then he pivoted to challenges ahead, acknowledging the surging virus that has claimed more than 400,000 lives in the United States. Biden looked out over a capital city dotted with empty storefronts that attest to the pandemic’s deep economic toll and where summer protests laid bare the nation’s renewed reckoning on racial injustice.
“We have much to do in this winter of peril, and significant possibilities: much to repair, much to restore, much to heal, much to build and much to gain,” Biden said. “Few people in our nation’s history have more challenged, or found a time more challenging or difficult than the time we’re in now.”
His predecessor’s absence underscored the healing that is needed.
Flouting tradition, Donald Trump departed Washington on Wednesday morning ahead of the inauguration rather than accompany his successor to the Capitol. Though three other former presidents — Bill Clinton, George W. Bush and Barack Obama — gathered to watch the ceremonial transfer of power, Trump, awaiting his second impeachment trial, instead flew to Florida after stoking grievance among his supporters with the lie that Biden’s win was illegitimate.
Biden, in his third run for the presidency, staked his candidacy less on any distinctive political ideology than on galvanizing a broad coalition of voters around the notion that Trump posed an existential threat to American democracy. Biden did not mention Trump by name in the early moments of his inaugural address but alluded to the rifts his predecessor had helped create.
“I know the forces that divide us are deep and they are real. But I also know they are not new. Our history has been a constant struggle between the American ideal that we all are created equal and the harsh, ugly reality of racism, nativism, fear, demonization that have long torn us apart,” Biden said. “This is our historic moment of crisis and challenge, and unity is the path forward and we must meet this moment as the United States of America.”
2021-01-20
Mr. Admin
Previous: 10,000 extra devices needed in Tower Hamlets for home schooling
Next: Trump leaves White House, skipping Biden inauguration