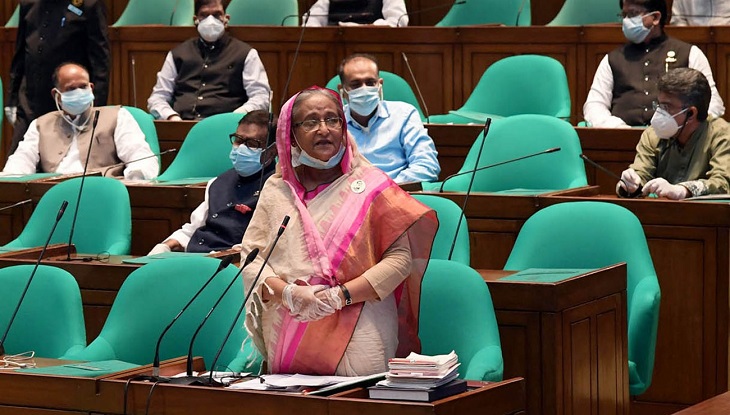 Prime Minister Sheikh Hasina said on Wednesday Bangladesh has attained self-sufficiency in fish boosting up the production by over 50 percent in last 11 years following the effective and time befitting measures of her government.

“New technologies of fish farming and production of seed fishes have been invented by the Bangladesh Fisheries Research Institute to protect 25 species of freshwater fishes from extinction,” she said.

The Premier revealed this in Parliament this morning in replying to a tabled question from the treasury bench lawmaker Ali Azam of Bhola-2.

Sheikh Hasina said Bangladesh has upgraded its position to second place in producing fresh water fishes as per the report of the Food and Agriculture Organization of the United Nations, and the country now becomes self-sufficient in fish.

Now, each person in the country intakes 62.25gm of fish against the daily demand of 60gm, she added.

The Leader of the House said her government’s aim is not only to meet the nutrition demand of the country’s people through boosting the fish production, but also set a goal to generate huge employment in this sector and earn foreign currency exporting fish to abroad.

Highlighting different measures taken by her government for the development of the country’s fisheries sector, Sheikh Hasina said the fisheries sector has witnessed a silent revolution due to the implementation of different training activities and encouraging people to cultivate Pangas, Shing, Koi, Magur and Telapia fishes.

She went on saying that imported Silver carp, Bighead carp and Grass Carp fishes with highest genetic quality from China have been shifted to 39 government hatcheries under the third phase of the project tiled brood bank installation to increase production in fixed water bodies.

Besides, the premier said, countrywide pona fish release and nursery installation activities in every year are being implemented along with re-excavation of water bodies to create an environment for fish farming.