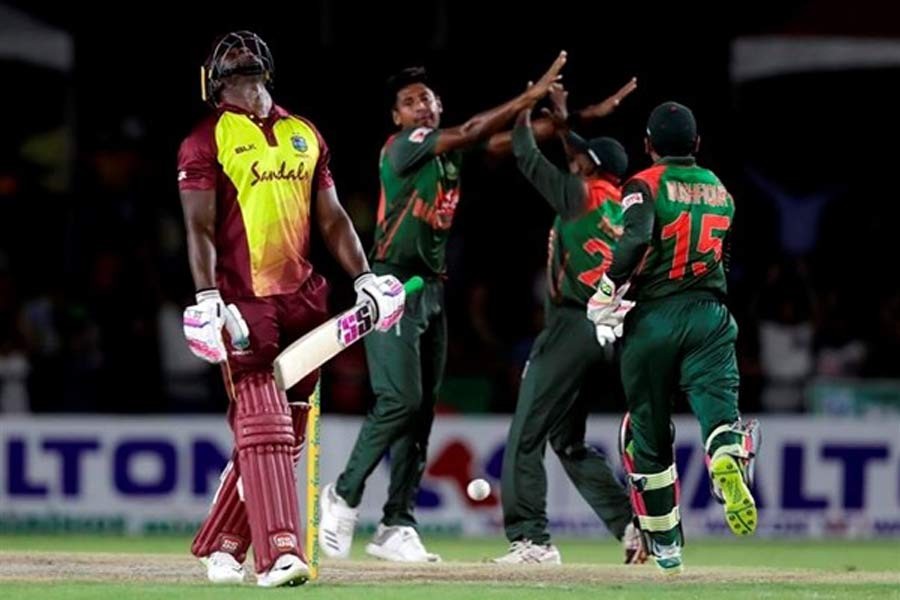 In a bid to inflict a whitewash on West Indies for the second time, Bangladesh will take on the visitors in the third and final ODI at Zahur Ahmed Chowdhury Stadium in Dhaka on Monday.

Bangladesh took the pride of sweeping the series at clean margin against West Indies for the first and so far the only time in 2009 when first choices Caribbean players skipped the series due to the financial spat with the board.

Thereafter they thrice won the series against West Indies but were unable to whitewash them. This time the Caribbean side also came with a second string team after their 12 top players pulled out of the tour due to Covid-19 fears.

Bangladesh so far won the first two matches with ease-beating the visitors by a six-wicket and seven-wicket margin at Sher-e-Bangla National Cricket Stadium in Dhaka to take an unassailable 2-0 lead. Bangladesh took the number of series victory against West Indies to five by clinching the ongoing series.

Bolstered by their absolute dominance, Bangladesh is expected another easy win against the tourists, whose batsmen looked utterly vulnerable against the home side bowlers.

In the first match, it was Shakib Al Hasan, who claimed 4-8 with his wily left-arm spin on his first match since his ICC-imposed ban lifted, to lead the side while off-spinner Mehidy Hasan Miraz starred in the second game with his career-best 4-25.

Thanks to the spinners, Bangladesh left West Indies in total spin to shoot them out for 122 and 148 runs in first and second ODI respectively-a rare record for Bangladesh as they for the first time in their history dismissed any opponent twice below 150.

While spinners had the figure to show in the first two matches, it was actually fast bowler Mustafizur Rahman who set the things up front. In both matches, Mustafizur was incredibly economical but most importantly teased the West Indies batsmen by swinging the ball back in, a delivery that he couldn’t expertly use in the past and therefore was dropped from the Test squad.

As he learnt the art, Bangladesh now a got a bowler Mustafizur Rahman with most important weapon alongside his stock weapons-cutter and slower.

Bangladesh captain Tamim Iqbal had already hinted that the team would break the winning combination for the third ODI in a bid to give some more players a chance to play the game.

It is highly likely that Bangladesh could rest Mustafizur to accommodate the bowlers like Taskin Ahmed while another pacer Shoriful Islam may get his debut. All-rounder Saifuddin is also in the consideration to the third match.

“Players like Taskin, Saifuddin have not got a spot in the XI. There’s a healthy competition going on,” Tamim said.

“It won’t be a worrying sign [the healthy competition]. Everyone should get an opportunity to play. All the guys who haven’t gotten an opportunity to play are capable of doing well. I am sure we will have some changes in the third ODI, and let’s hope whoever comes in does well,” he added.

The two sides had already played 40 ODIs, among which Bangladesh won 17 in contrast of Caribbean’s 21 and two matches fetched no result. The victory in the second ODI was Bangladesh’s seventh in a row against the Caribbean.

However the visitors would definitely not like to let Bangladesh extend the streak to eight as they are seeking to restore some pride alongside snapping the hosts’ winning streak.

“We came here for 30 points but we still have chance to get 10 points in this competition,” West Indies coach Phil Simmons said.

“But most of all, just the improvement. We have got from 122 to 148, but we need to get into the 230-250, so that we can be competitive. Give the bowlers something to bowl at, and show mettle in that aspect. But definitely ten points would be the ultimate,” he added.