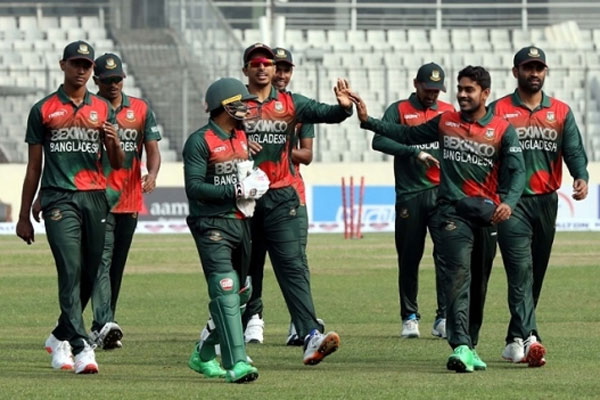 The Bangladesh Cricket Board (BCB) announced a 20-member squad for the national team’s tour of New Zealand today, including left-arm spinner Nasum Ahmed as only the new face.

All-rounder Mosaddek Hossain Saikat, opener Naim Sheikh and fast bowler Al-Amin Hossain who were not in the team against West Indies series also made a return to the side.

Left-arm spinner Taijul Islam was dropped from the previous squad along with Shakib Al Hasan who skipped the tour due to be with his wife as they are expecting their third baby.

Bangladesh has already amassed 30 points in the ICC Cricket World Cup Super League, courtesy to their 3-0 whitewash over West Indies. The away tour in New Zealand will be crucial in their aspiration to make a direct entry to the 2023 World Cup in India.

Upon their arrival to New Zealand, the Tigers will be placed in strict quarantine after which they would start their practice session.

Bangladesh will play the first ODI against New Zealand on March 20 at University of Otago in Dunedin. The second ODI is on March 23 at Hagley Ovel in Christchurch and the third ODI is at Basin Reserve in Wellington on March 26. The first and third ODI will start at 4 am (Bangladesh Time) and the second one will begin at 7 am.

2021-02-19
Mr. Admin
Previous: Food and food packaging highly unlikely to spread Covid-19, experts say
Next: Virat says spending time with Anushka is what ‘matters at the end of the day’

Kathryn Bryce, Mushfiqur Rahim voted ICC players of the month for May 2021