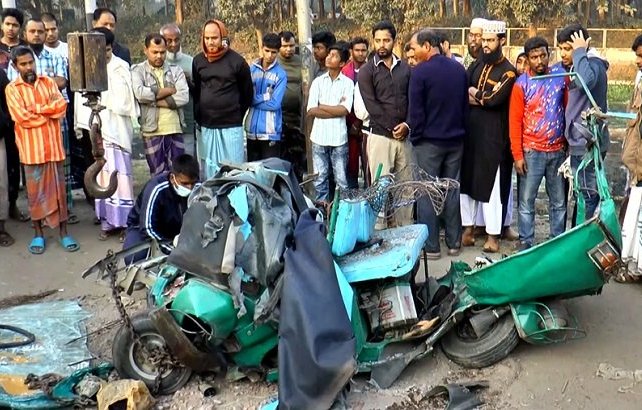 AFour people, including driver of a CNG-run three-wheeler, were killed when a bus hit their auto-rickshaw in front of Majhira Cantonment check post on the Dhaka-Bogura highway in Shajahanpur Upazila in Bogura district in the early hours of Friday.

Of the deceased, two were identified as Kalidas, 72, and driver Shah Jamal, 34, from Shajahanpur Upazila.
Sherpur highway police outpost in-charge Inspector Baniul Anam said the accident took place at around 5.30 am when a bus named Shawon Paribahan hit the CNG-run auto-rickshaw from behind leaving three persons dead on spot and wounding one.

The injured died on the way to the Shaheed Ziaur Rahman Medical College and Hospital, he added.

Police seized the killer bus and the CNG-run auto-rickshaw and those were kept at Sherpur Highway Police Camp.

The bodies of the deceased are also kept in the highway police camp, Baniul informed.

He added that the bodies would be handed over to their relatives without autopsy.