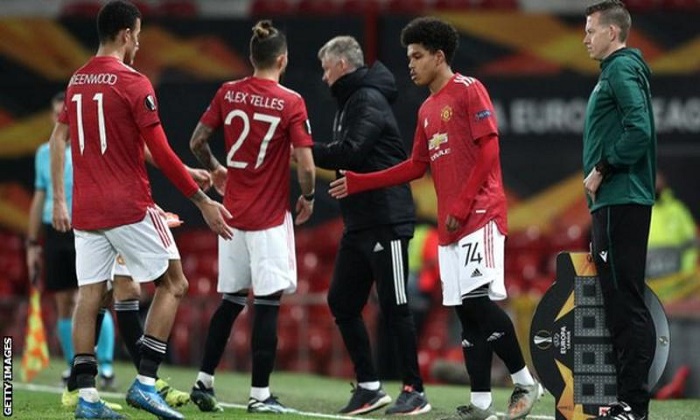 Shola Shoretire became the youngest player to appear for Manchester United in a European game as Ole Gunnar Solskjaer’s side eased into the last-16 of the Europa League with a goalless draw against Real Sociedad.

At 17 years and 23 days, Newcastle-born Shoretire beat the record of Norman Whiteside by 108 days on a night when January signing Amad Diallo also made his first appearance at Old Trafford.

They were notable milestones on an evening when Bruno Fernandes went closest for the hosts in the opening period as he smashed a lay-off from Fred onto the crossbar.

However, the best chance turned into a miserable failure for visitors’ skipper Mikel Oyarzabal.

Presented with the opportunity to give his side an early lead from the penalty spot, Oyarzabal copied Fernandes’ distinctive skip as he went to strike the ball and sent it so far wide it almost hit a photographer by the side of the goal.

Daniel James had a header saved by Alejandro Remiro before the break and Marcus Rashford, who took over the captain’s armband when he replaced Fernandes at half-time, went close after it.

Axel Tuanzebe thought he had scored his first United goal when he powered in Alex Telles’ corner, only for the intervention of the video assistant referee to halt Tuanzebe’s celebrations.

Referee Lawrence Visser was advised to watch the incident on a pitchside monitor and judged that Victor Lindelof had committed a foul before the ball reached his fellow centre-back.

It was all rather mundane, with the hosts’ four-goal cushion from last week’s game in Turin ensuring their place in Friday’s draw – when Steven Gerrard and Jose Mourinho are potential opponents for Solskjaer – was never in doubt.

Their victory means there will be four British sides in the Europa League last 16, with Tottenham, Arsenal and Rangers all advancing, although Leicester were eliminated by Slavia Prague.

The draw for the last 16 at 12:00 GMT and the BBC Sport website and app will have live text coverage of the draw.

With no seedings, and no restrictions on sides from the same nation facing each other, the draw could produce an all-Premier League clash.

Like United coach Michael Carrick, Alan Shearer, Peter Beardsley and former United skipper Steve Bruce, Shoretire was a member of the famous Wallsend Boys Club when he was very young, although his talent was obvious early on and he spent a brief period training with Manchester City before signing permanently with United as a nine-year-old.

After playing in the Youth Cup at 15 – and memorably in a quarter-final against Wigan after spending the whole day in school – it is no wonder United had the terms of Shoretire’s professional contract sorted well before the day he signed it on his 17th birthday.

By that point, head of academy Nicky Butt had been part of the decision to push Shoretire into the under-23 set-up to see how he adapted.

The progress has been swift given he now has two first-team appearances to his name after becoming the second youngest player to play in the Premier League for United in their win against Newcastle on 21 February.

“He’s a young kid we believe in, a great attitude, you can see the shape of him, physically, he’ll be an athlete and technically he is very, very good,” said Solskjaer.

“He makes good decisions, we’re going to gradually feed him into this team. He’s grounded, works hard in training, and is a likeable boy we can see in the future.”

With Amad Diallo, the 18-year-old Ivorian, also given his first Old Trafford appearance against Sociedad, Solskjaer will be please to see more talented youngsters emerging at the club where he was tasked with implementing a cultural reboot when he replaced Jose Mourinho as manager in December 2018.

–Sociedad have been eliminated from both of their last-32 ties in the Europa League, also exiting the competition at this stage back in 2017-18 versus Red Bull Salzburg.

–United have gone unbeaten in each of their last 15 matches at Old Trafford in the Europa League since a 3-2 defeat by Spanish opponents Athletic Bilbao in March 2012.

–Sociedad are now winless in their four matches with United across all competitions (drew two, lost two), failing to score in each clash.

–Rashford became the first Premier League player to feature in 40 matches in all competitions this season.

–United’s Fernandes has hit the woodwork more times in all competitions than any other Premier League player since the start of February 2020 (11).

–Sociedad’s Oyarzabal became the first visiting player to fail to score a penalty attempt at Old Trafford against United in any competition since Leighton Baines for Everton in October 2014 in the Premier League.