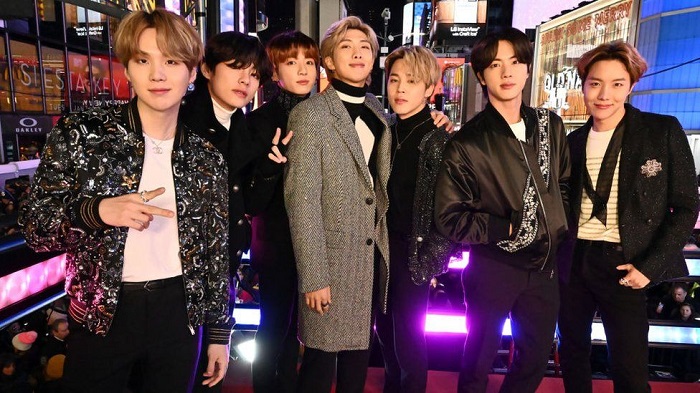 Pop group BTS have been named the best-selling artists of 2020 by the IFPI, the organisation that represents the global recorded music industry.

The accolade caps a stellar year for the Korean boyband, who released two chart-topping albums in 2020 – Map of the Soul: 7 and Be.

They are the first non-Western act to win, and the first whose songs are not predominantly sung in English.

The award is calculated according to an artist or group’s worldwide sales, downloads and streams, covering their whole body of work.

Drake came third, with The Weeknd fourth and Billie Eilish at number five.

BTS, also known as the Bangtan Boys, were formed in 2013 and consists of seven members – Jin, Suga, J-Hope, RM, Jimin, V and Jungkook – who come from all over South Korea.

They’ve subsequently become standard-bearers for the K-pop scene, selling millions of records and concert tickets, while racking up billions of streams.

The group was the brainchild of veteran writer and producer Bang Shi Hyuk, who formerly worked at the K-pop entertainment giant JYP, then formed Big Hit Entertainment and put BTS together around group leader, RM.

It more than made up for their inability to tour amid the Covid pandemic. The gap in their schedule also allowed BTS to record their second album of the year, which they billed as a “letter of hope” to fans.
The record contained Dynamite – their first single to be recorded entirely in English, which topped the US charts in August, after breaking one-day streaming records in the US.

Frances Moore, chief executive of IFPI, said: “BTS are a global phenomenon. They have had another outstanding year… and [are] continually finding creative and engaging ways to share their story with the world.

“They truly show the power that music has to bring joy and happiness to people the world over.

“We would like to congratulate RM, Jin, Suga, J-hope, Jimin, V and Jung Kook and we are excited to see what they have in store next.”