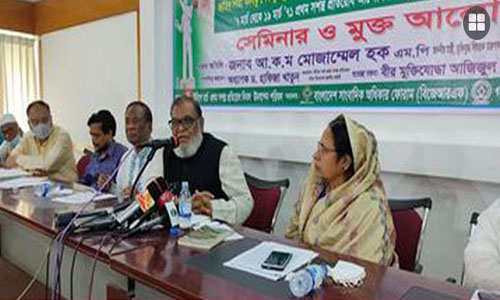 Liberation War Affairs Minister AKM Mozammel Haque has said that no decision has yet been taken to revoke Ziaur Rahman’s gallantry title only a recommendation placed in this regard.

“No decision has yet been taken to revoke Ziaur Rahman’s gallantry title Bir Uttam, only a recommendation placed. Steps will be taken after getting the probe report,” said the minister at a discussion held at Jatiya Press Club on Saturday.

Mentioning that confusion has been created over the issue, the minister said,”On the day of the meeting, a recommendation was placed to revoke the titles of the self-proclaimed killers of Bangabandhu who were convicted by the court. Then a discussion was held that Ziaur Rahman had connection with Bangabandhu’s killers.

Many argued in favour of Zia’s involvement in the assassination,” he added.

A committee has been formed asking to submit within two months its report with evidential documents, he said adding that the committee will discuss the matter after having the report.