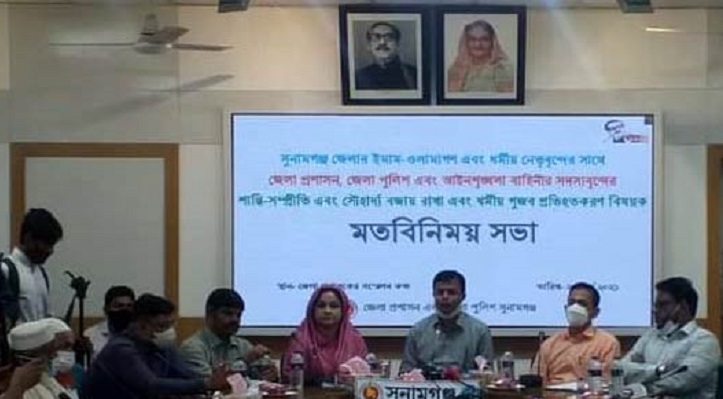 A group of people along with freedom fighters in Sunamganj has foiled the prescheduled March 21 programme of Hefazat-e-Islam’s Joint-Secretary General Mawlana Mufti Mamunul Haque.

The development came in a meeting participated by police, administration, politicians and Hefazat-e-Islam leaders in Jamalganj Thana on Saturday.
Earlier on the day, Upazila Awami League called for a rally through mike announcement in the area vowing to resist Hefazat-e-Islam programme.

Later, members of police and local administration arranged a meeting inviting leaders of all sections to fend off any untoward incident.

The law enforcing agency also directed Mamunul not to enter Sunamganj for greater interest of peace and solidarity in the area.

Enraged by Mamunul Haque’s speech at a local conference, a young Hindu man from Noagaon village allegedly made a Facebook post on Tuesday criticizing Mamunul, who earlier opposed the sculpture of Bangabandhu.

Later on Wednesday morning, several thousand followers of Hefazat leader Mamunul Haque from Kashipur, Nachni, Chandipur and some other Muslim-populated villages gathered in Noagaon village and attacked the homes of local Hindus.