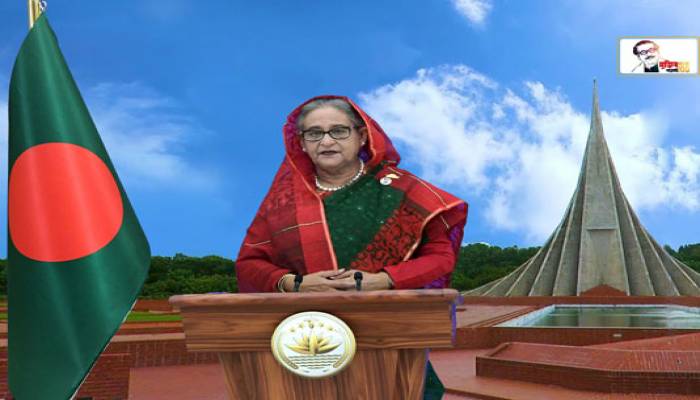 Prime Minister Sheikh Hasina said Bangladesh must take a fresh vow to heighten further its stature as the nation celebrates the golden jubilee of Independence simultaneously with the birth centenary of Father of the Nation Bangabandhu Sheikh Mujibur Rahman.

The premier made the call in a nationwide address on Thursday, on the eve of the Independence and National Day, paying tributes to 1971 martyrs, Bangabandhu, four national leaders, those who fought for the independence and the August 15 carnage victims, reports BSS.

The full text of her televised address is as follows:

March 26 is our great Independence Day.

This time it is the 50th anniversary of the independence.

We are celebrating the golden jubilee of independence.

At the same time, the birth centenary of Father of the Nation Bangabandhu Sheikh Mujibur Rahman is being celebrated. I am expressing my profound gratitude to Almighty Allah- He has given us the capability to celebrate this golden jubilee.

On the occasion of this auspicious day, I am extending my heartiest greetings and congratulations to all citizens of Bangladesh living at home and abroad on the eve of the Independence Day.

I am recalling with gratitude those friendly states, institutions and individuals who had extended their hands of cooperation during our deep crisis period.

On the night of March 25 in 1971, Pakistani occupational forces swooped on unarmed Bangalees in the name of ‘Operation Search Light’ as per their pre-plan.

They killed hundreds of people by opening fire. Set numerous houses on fire.

Hundreds of Bangalees were killed in other cities of the country.

Valiant Bangalee members of police and the then EPR tried to build counter resistance in different places, including Dhaka.

Leaders and Workers of Awami League and Chhatra League along with the people obstructed movement of Pakistani soldiers by creating barricade on streets and alleyways in neighborhoods.

But the unarmed resistance didn’t last longer in the face of the modern arms, tanks and armed vehicles.

Father of the Nation Bangabandhu Sheikh Mujibur Rahman had proclaimed independence in the first hour of March 26 before he was arrested by the Pakistani soldiers.

He gave directives to the entire nation for resistance war to free the motherland from enemies.

His proclamation was disseminated across the country through wireless of the then EPR. Pakistani junta brought Bangabandhu Sheikh Mujibur Rahman to the West Pakistani and threw him into prison.

At his directives, the brave Bangalees freed the country from enemies through the nine-month Liberation War. The final victory was achieved on December 16 in 1971.

I am recalling with profound respect the martyrs of the black night of March 25.

I am paying tributes to the Greatest Bangalee of All Time, Father of the Nation Bangabandhu Sheikh Mujibur Rahman.

I am recalling the four national leaders, 30 lakh martyrs and two lakh repressed mothers and sisters of the Liberation War. My salute (salam) to the valiant freedom fighters.

The independence of our loving motherland is the yield of the constant political struggles of 24 years.

And Father of the Nation Bangabandhu Sheikh Mujibur Rahman led the struggles from the forefront from the beginning to the end.

In 1948, he sowed the seed of autonomy in the movement with the demand of making Bangla as a state language and turned the seed into a tree of movement for establishing independent motherland by nurturing the seed carefully.

As the great man named Bangabandhu Sheikh Mujib was born, we are proud citizens of independent and sovereign Bangladesh.

As he was born, today we can feel proud of our own country, language-culture.

Sheikh Mujib is the architect of a country and a nation state.

So, we are celebrating his birth centenary and golden jubilee of independence simultaneously.

I am extending thanks to the people of Bangladesh as they brought Bangladesh Awami League, which led the Liberation War, to state power during the celebrations of the two important milestones of the national life.

Bangabandhu Sheikh Mujibur Rahman not only dreamed for an independent-sovereign country but also for wiping out the sorrow and distress of the common people of this soil who became victims of suppression-exploitation, repression-persecution, died from starvation and diseases for hundreds of years and dreamed for ensuring their improved life with food, clothing and treatment.

It is unfortunate that the anti-liberation evil forces had assassinated Bangabandhu and most of his family within only three and half years.

Through his assassination, the development and progress of Bangladesh was stunned as well as the spirit of Liberation War was also destroyed.

At a rally in Sylhet on June 28 in 1972, Bangabandhu Sheikh Mujib said: “. . . I didn’t do politics for becoming prime minister or minister. I did politics for the emancipation of 7.5 crore people. Now my politics has been freed.

My economy needs emancipation. If it is not possible, the independence will go in vain.

Bangabandhu Sheikh Mujib didn’t only dream but knew how to translate dreams into reality.

After the independence with empty hand, he accelerated the economy by making functional the destroyed roads, bridges, culverts, railway tracks, ports within only three and a half years.

Bangladesh got recognition of 126 countries and membership of 27 international organizations. He enlisted Bangladesh into the list of Least Developed Countries (LDCs).

In the post-1975 period, the undemocratic rulers, who illegally grabbed the power, derailed Bangladesh from its ideology.

For the long 21 years, it deceived the country’s people.

It made people deprived of their rights to food, clothes and home by looting their properties. Bangladesh was introduced abroad as a country of baggers.

The 50 years of the country’s independence is a significant milestone in national life.

Programmes of the golden jubilee of the independence become more colourful for us since Bangladesh Awami League government is running the state with the ideology of the Liberation War.

Today, Bangladesh stands with its head high before the world as a proud state by making all the negative and frustrating assumptions regarding this country baseless.

Even, a decade ago, Bangladesh was presented as an example of poor and underdeveloped country, but development experts today are presenting Bangladesh as a role model of poverty elimination and development.

I am presenting the comparative scenarios of different socioeconomic indexes of the country since fiscal 2005-06.

Foreign currency reserve was 0.744 billion US dollar, that means less than US$ one billion, but at present it exceeded US$ 44 billion.

That time, allocation of social safety net sector was Taka 373 crore. It increased to Taka 95,574 crore in the current fiscal.

About 47 percent of the country’s people had access to power in 2005-06 but now it increased to 99 percent.

The credit of these achievements of today goes to the country’s general people.

The farmers-labourers-professionals, our expatriate brothers and sisters, the entrepreneurs of the country made the impossible work of poverty elimination possible through their labour, merit and innovative power.

My government has created only the conducive environment by providing policy support.

You have proved that the people of Bangladesh can make any impossible task possible if they get a suitable environment.

Bangladesh achieved remarkable success in its socioeconomic indexes due to our restless labours in the last 12 years. Last month, Bangladesh was recommended for graduation to a developing country from a least developed one.

The path of today’s graduation was not smooth at all.

The anti-liberation forces continued ill-efforts inside the country and abroad to halt the advancement of Bangladesh. The efforts continue still now. That is why we all should play the role of the vigilant watchmen to resist all the anti-state efforts.

We have achieved the independence of this beloved motherland in exchange of a sea of blood.

Leaving the side of Pakistan, members of the armed forces and law enforcing agencies joined the resistance struggle. All of our freedom fighters, irrespective of cast and religion, participated in the liberation war.

They had only expectation that this country would be independent. The country’s people can live in peace and happiness. All would enjoy fundamental rights. Today, we have fulfilled their expectations to some extent.

On this happy occasion of the golden jubilee, we have to take a pledge so that none can play with the fate of the people of Bangladesh and hinder the advancement of country’s democracy and development.

Sinking all differences, let’s build Bangladesh as the developed, prosperous and non-communal ‘Sonar Bangla’ as dreamt by the Father of the Nation being inspired by the spirit of the Liberation War.

We are celebrating the golden jubilee of the country’s independence. But this celebration should not be confined to formalities only.

On the occasion of the birth centenary of Father of the Nation and the golden jubilee of the independence, we have to take a fresh vow to take the country to a new height.

This year’s Independence Day is not like the previous ones. This is the 50th anniversary of the independence. This is a day of bliss and gaiety. I, therefore, call in the words of Kabiguru Rabindranath Tagore:

Everyone, stay well and stay healthy. May Allah Rabbul Alamin bless all of us.

2021-03-25
Mr. Admin
Previous: Ramadan Tent Project and Islamic Relief UK Team up to alleviate world hunger this Ramadan through My Open Iftar
Next: The ubiquitous orchid: A pandemic project with surprises

Bangladesh gets another 2.12 million AstraZeneca jabs from France

‘Govt decision on whether current restrictions be extended after Feb 6’