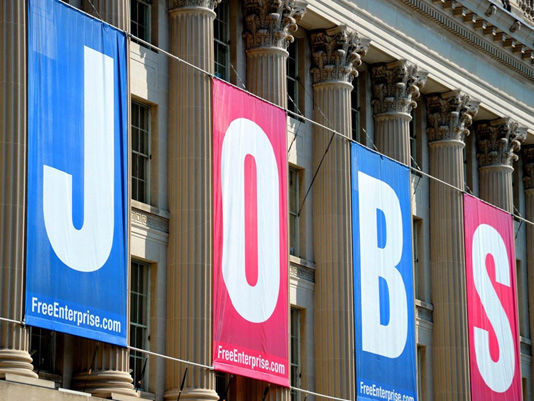 New filings for regular unemployment benefits in the United States dropped to 684,000 last week, the government said Thursday, their first reading below 700,000 since the pandemic sparked mass layoffs.

The drop of 97,000 from the prior’s week’s upwardly revised figure was much better than analysts forecast and comes as Covid-19 vaccinations offer hope the economy can recover this year, reports AFP.

But, in a sign of the virus’s ongoing toll, 241,745 new claims were received in the week ended March 20 under a special program for freelance workers, the Labor Department said.

That was nonetheless nearly 42,000 less than the week before, and though analysts acknowledged the crisis is far from over, the economy may finally be on the path to a sustained decline in joblessness.

“We’re guessing that each week sees some firms either downsizing further or throwing in the towel, unable to hang on until the economy reopens,” Ian Shepherdson of Pantheon Macroeconomics said.

“This gradual attrition should not last much longer; we expect claims to fall sharply as the economy reopens fully across the second quarter.”

Regular claims nonetheless remained above the worst level of the 2008-2010 global financial crisis more than a year into the pandemic, and totaled 925,745 last week if those filed under the Pandemic Unemployment Assistance program for gig workers are included.

As of the week ended March 6, the latest for which data was available, almost 19 million people were receiving some form of aid, the data said.

“Progress in jobs recovery is assured over coming months on wider vaccine distribution and a resumption of more normal business operations, especially in the Covid-sensitive service sector, which will bring back jobs,” Rubeela Farooqi of High Frequency Economics said.

However, she warned that the recovery could be lengthy, “given permanent job loss from business closures and a shift to technology could be constraints in a post-pandemic economy.”